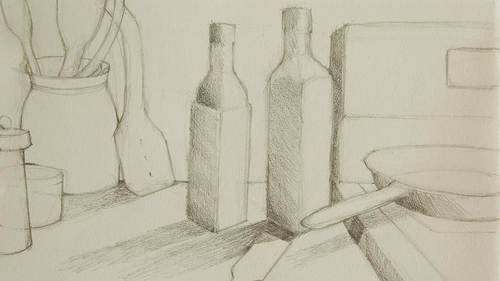 Once you've set up your composition as I've done here in the studio, the next consideration is the lighting. Lighting can either be from natural light, which is pretty much what we have here in the studio, the light's coming in from the left. I have Western exposure, so sometimes the light is rather dramatic, right now it's a bit more subtle. But when you're at home, setting up your own lighting, using a desk lamp, often I try to get a single light source if I'm using artificial light. That can be more dramatic and a little bit less confusing. When you use multiple lights, sometimes it casts like triple shadows and it's really best, especially when you're first starting out, practicing tonal rendering and working with lighting to keep it as clear and concise as possible. So right now we have this set up lit with natural light. You can see shadows are being cast to the right side, highlights are on the left side. And I started to work up a linear version of the setup using pretty much a...