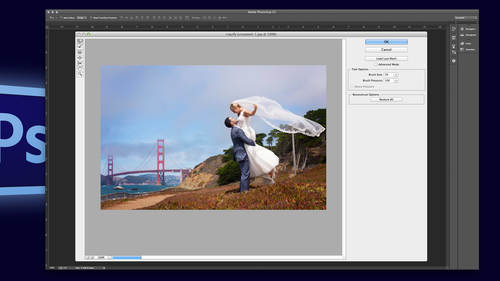 And we've got a very lovely and talented instructor joining us. Susan allen has been a sought after a photo shop expert for educator and expert for over twelve years, and she really she works with professional photographers, helping them to master image enhancement. We're thrilled to have her senses that I'll let you take it away. Thank you. Well, I am so excited to be here, and this class is going to be about liquefy and other warp tools to make you look your best or your clients it's mostly about people I photographed lots of portrait's and people, and everybody wants to look their very best, right? Well, think about how we see ourselves. I mean, we're trying to live up to our own self image, and this is how everybody sees themselves in their bathroom mirror leaning forward with nice flat light, no double chin, we look really good, right? So we need to live up to that standard. So that's, how I retouch people, of course, I wantto make people look realistic, but we all want to look ou...

Learn to use Liquify as a powerful tool to make people look their best, not match the unrealistic standard of pop perfection! We all can benefit from attractive posing and clothing that fits us well, but occasionally we find our clients in not-so flattering light or ill-fitting clothes. Liquify to the rescue! Chin and bulge removal and fixed clothing failures are all great feats that are easily accomplished in mere seconds with Liquify. Learn how to use all of the tool features for precision and control, so that your workflow is speedy and your images are free of visual distortion. You will also see some some surprising ways to fix hair and clothing failures with Warp, and understand which tools to use to fix tricky surroundings -- and what to do when Warp or Liquify won’t quite do the job!

I learned so much from this course, Suzette was a wonderful teacher. I think I will watch this over and over because there is so much information in it that will save me tons of time. I also purchased her other class as both are awesome. Thanks

Think you know how to use Liquefy? Watch this and learn more about how to use the tool to the best advantage! Suzette has great, real world examples (not picture-perfect models) which benefit from just a light hand on the liquefy tools. Suzette is a master re-toucher, and you can learn from watching both her workflow and her techniques. Also seeing the warp tool in action, and examples of where you would want to use it, were very useful!

This is the best course on Liquify I've ever seen! The photos look like my clients not magazine models. It's a bonus that Suzette uses Windows. It's so rare to hear: Control and Alt mentioned first!