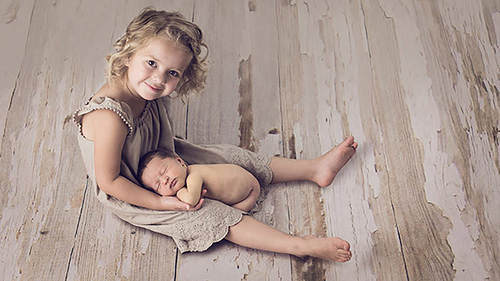 Bonus Video: The Five S's of Soothing a Newborn

Well, welcome everyone we're going to talk a lot about babies today, which is like my favorite time together and I see a bunch of good smiles in the audience there that's that's always fun just a little bit about me just to put a face with the name I like like susan said, I have a studio in bend, oregon I work mainly with babies as matter of fact, we just recently nichd into babies almost completely, which really did amazing things for the business and grew it exponentially here in a short amount of times that was really fun I'm also an official trainer for pro select software here in the u s so I teach photographers pro select in sales how to do it in person sales on that to me has been a really great thing for, you know, increasing your profitability in your revenue stream, which is we're always looking for a cz business owners, so if you want to find me this is how to find me real quick. I'll show this light at the end too, so but people always like to ask questions and I love to an...

This course is great if you want a quick video with tips on how to take newborn photographs with parents. It is a great alternative to the popular and common &quot;basket pose&quot; or &quot;beanbag pose&quot; that a lot of photographers use. This is almost a shorter version of another course Julia did on Creative Live. So if you want more in depth detail this class is not for you. I would highly recommend any of Julia Kelleher's full classes. She is a creative genius and an amazing entrepreneur! Her classes have changed my photography career forever. I couldn't thank Julia enough.

Ms. Julia, This is an awesome class for the price you have put on it. Thank you so much. I am a grandfather and own my own photography business...and love your style of presenting...Newborn Photography.

Julia's classes are a must for newborn photographers. If you are not a newborn photographers there is much to be gained by getting these classes. Buy all of them! I am now 4 times more profitable than I was 2 years ago. I am so happy that she teaches on Creative Live. I really don't know where I would be right now, without first finding this class.