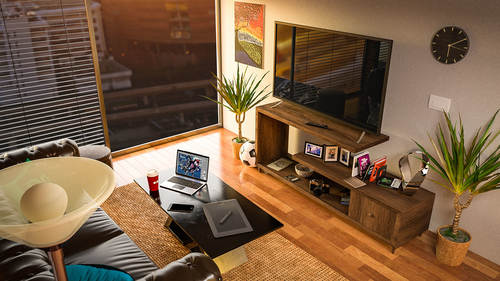 Adding Materials and Decals to 3D Models in Dimension

Building a 3D Environment in Dimension

Enhancing Your Final Render in Photoshop

I think that we should get started. We only have one hour, and I have a whole bunch of material that I wanna show you. So I want to make sure that I have enough time to show you. But before we start, I just want to show you one project that I worked on with Adobe Dimension. And let me just scroll up to the top of the page. So this is an image that was completely generated using Adobe Dimension. Nothing in that scene, except for the buildings in the background are real. Everything was computer generated. And everything in this scene was simply dragged and dropped onto the 3D environment, and I used Photoshop to create the textures. The textures are the what gives a 3D model it's appearance. So for example the texture in this book was just the cover of a book of one of my friends that was written by Glyn Dewis, a photographer out of the UK. And for example the painting in the background and the image in the computer screen, those are all materials that I edited in Photoshop and applied t...

This class blew my mind! Before watching, I probably wouldn't have even attempted incorporating 3D into my composite work. Now, it is WAY less intimidating. I can't wait to try it out!