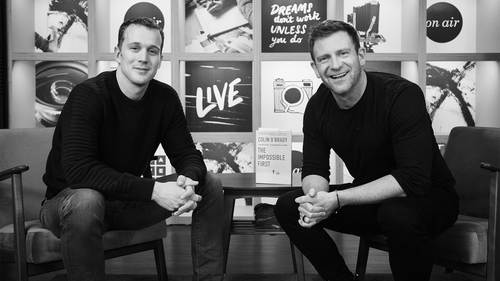 everybody. What's up? It's chase. Welcome to an absolute of show. You guys know the shows where I sit down with amazing humans and I do everything I can to unpack their brain with the goal of helping you live your dreams and career in hobby and in life. My guest today is going to blow your brain wide open. He's one of the top adventurers in the world. He is a speaker across lots of different genre. And he is the new I guess. New York Times best selling author of the book The Impossible First, my guest today is the column already. Welcome to the show Having me here. I love you. Great to be here. Yes, he made it happen. Thanks India for connecting us. Sara are friends that made it made this happen? Very happy to be in the show. Um, and congrats on the book. Thanks, man. Jim List. It's just came out two weeks ago to set The New York Times, But so is this proud moment, you know, poured, uh, my first book, but I poured my heart and soul into writing it, So it's nice to have it. How out in t...

Colin O’Brady is a world record holding explorer and one of the world’s top endurance athletes. Fresh out of college, Colin had a vast world of possibility in front of him when a tragic accident left him hospitalized. Unsure if he’d ever walk again, his injuries covered nearly 25% of his body, primarily damaging his legs and feet. Despite the odds, his mother encouraged him to dream big and he dared to set a seemingly impossible goal that set him on a path to rethink what’s possible.

Fast forward to today, and Colin’s list of achievements is staggering. In this episode, we get into many of his harrowing adventures, including his solo, unsupported, unassisted crossing of Antarctica. Even if you’re not a professional athlete or have any ambition to break world records, his story will resonate. We all need courage, a strong mindset, and pure grit to overcome obstacles, pursue big dreams, and do the seemingly impossible.

A few highlights from our conversation:

Colin O&#8217;Brady is a world record holding explorer and one of the world&#8217;s best endurance athletes. Colin is regarded as a foremost expert on mindset, a highly sought after keynote speaker, and a bestselling author.&#160;
SEE INSTRUCTOR'S CLASSES