Lesson 4 from: Shooting for Mobile Photography 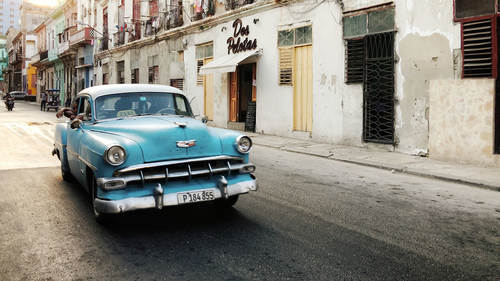 Lesson 4 from: Shooting for Mobile Photography

In this lesson we're gonna be talking about composition. We're up on this beautiful rooftop, and what that enables us to do is really play with this horizon line. It's a little slanted for some of the images. Just based on the angle of the rooftop. But we're gonna talk a little bit about the rule of thirds, and the benefit of using negative space and filling your frame. And I'm also gonna talk a little bit about how to position your subjects as well as how to position yourself in relation to your subjects so that you can isolate their bodies from one another. So, we're ready to start shooting. We are up here on the rooftop, and it's actually a really cool space. It's like this great stage, but slanted. So we have to kind of modify what we're doing to make sure the dancers are safe. I've instructed the dancers to go ahead and give me a couple poses they feel comfortable doing up on this slanted rooftop. So there's not gonna be any sort of significant lifting or anything. They're gonna b...

e mostly working with each other, using a little resistance and some of the poses that they like. Alright. So, are you guys ready? Okay. The thing that I'm going to be paying attention to here is actually, I need to kind of get the rule of thirds in my frame, so I have my grid turned on on my phone, and I'm gonna be kind of lining up the horizon, which is the rooftop, with that third. (laughing) Not exactly on the third, but kind of close. You know the rule of thirds basically states that you should divide your frame up into three segments, horizontally and vertically and to place your important elements either along the lines or along the places where they intersect. So let me just capture this while they're here. I'm gonna get down low. I really want to isolate their bodies against the blue sky. I'm gonna let them go ahead and get into the pose that they want, make sure my exposure's good and do a burst. That's great. That's great guys. I'm just making sure that their positioned in that intersection of the lines following the rule of thirds. Taking that burst to make sure I get it. The rule of thirds really exists to remind us to not place our horizon on the center or in the center of your frame. And when you're making these compositions that follow the rule of thirds it doesn't necessarily have to be exactly on the third. So I'm gonna capture them again, and I'm gonna make sure my horizon's down around that third, and that they're roughly at the third at the intersection of those lines right. And I'm getting down low because I really want to isolate their bodies against the sky. That's wonderful. And I'm doing a little burst to capture that movement. That's great guys. I'm also really maximizing the negative space in this image because that blue sky is so great. I'm gonna get closer for this one because I really want to show sort of the difference between having a lot of negative space in an image and having less. Okay. So it's important to get in position so that you're ready to shoot as soon as they're in the position they need to be in. Do you think you could do that kind of this way? Angled? You could try. I could straighten my legs and sit right here. Sure. I can come down and we can do it this way so that at least you're even. Yeah. I just wanna get the blue sky behind you. So what I've done is I've moved them into this new position because what I wanted to do was isolate them against the blue sky and that sideways position, that pose that they were getting into was causing me to have to shoot down in that direction and there's another building in the background there that I don't want in my frame. So in order to maintain the blue skies behind them, I've shifted them this way. So go ahead and get into your position again. And remember I'm filling the frame this time. That's great. I'm getting down low so that I can isolate the bodies against the blue sky as much as possible. Beautiful. That looks great. Thank you. We're gonna do another shot here, and I have another pose that they're about to get into, and what I really wanna talk about is how important it is to distinguish each body from the other. And I want to show you some different angles to photograph this from and why one might be better than the other. I'm capturing this shot of them now, it's beautiful, but what I'm noticing is that they're figures aren't as separated as I would like them to be. So in order to get more distinct figure shapes from them, I'm gonna shift my body and I'm gonna photograph that same pose from this angle to show how the bodies separate as I move my angle. Okay. Beautiful. So that's, when you compare these two images you'll see how different their body shapes are, and how by simply moving my angle as the photographer, the resulting images are very different. Let's do one more of that shot. Great. Perfect. Thank you. So to recap what we did which was to photograph the dancers up here on this rooftop and a couple different poses and from a couple different angles. What's really important to remember with composition is that it's really up to you as the photographer to decide what goes into your frame, how it fits into your frame, as well as where you as a photographer are shooting from. All of those things are really important when it comes to your final composition.