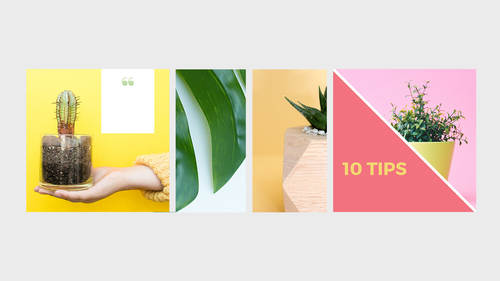 Okay, now we're ready to put our text into this frame. There's a couple different options here. Personally, what I like to do is make my own text box. You can put text into an existing frame, and you can edit it within the frame, but for some reason it just always ends up making me a little frustrated. So I'm gonna show you an alternative, and either option works, but I think this is a little more versatile. So I'm gonna grab the type tool, and I'm not gonna worry too much, we can always adjust it, so I'm just gonna draw a big old box. And now we're gonna type a nice little quote, and I'm not gonna care about the size, the color, the font, the alignment, nothing about the style. I'm just gonna type this great quote that says "A flower does not think about competing ..." I can't even see if I'm ... "Competing with the flower next to it. It just blooms." And then we'll hit a return, and let's attribute this quote with a em-dash, so I'm gonna press Alt or Option Shift and the dash key, an...

Nice short course (played on double speed) to make some Socia Media Assets in Adobe InDesign. I use Photoshop more for these kind of purpose. It's not a complete Adobe Course, nor a complete Sociale Media Design course. As part of the subscrition its a fun small/mini course.