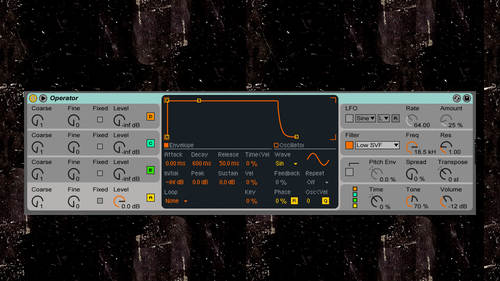 All right, Welcome back for lesson two of level two we're gonna be talking about now taking that subtracted patch that we made that was quite approachable and fun to make on a kind of reverse engineering it down into a FM patch and will notice the farm or interesting capabilities were empowered with. Now that we know what we know about course tuning and discreet envelopes and Siri's routing and the likes. So here's where we left off my subtracted jam here, going on and able to work that low pass filter and it's modulators to kind of open and close my mouth and send some words meta mullen additive. Turn this off, Turn this off and go to pure Siri's mode. Right now, I'm gonna take my first wave form, Kick it over to a sign Mills turning these off back to pure signed territory. This is really approachable tone, and I honestly recommend when you're laying down your first patches, stick with a sign if it just works and then go from there, don't worry too much about knowing every single para...

This in-depth class unlocks the inner workings of one of the most powerful multi-mode synthesizer tools around: the Ableton Operator. Coined as the "Swiss Army Knife" of synthesizers, the Operator is capable of handling the heaviest sound design tasks - and of keeping the process simple and effective from start to finish. Join master sound designer James Patrick as he details every single element within the Operator instrument. Though he'll start by exploring it as a basic synthesis engine, by the end of the class he'll reveal it to be an instrument capable of creating the most advanced, futuristic sounds of our time. He'll talk about combining Additive, Subractive and FM synthesis elements. He'll also cover the details of creating drums, percussion, leads, brass, pads, and evolving textures.

People complain about Abletons "uninspiring" synth presets, and Operators businesslike interface doesn't scream "fun". It is however, an insanely fun and powerful instrument once you get your head around it. This class is perfectly formulated to turn anyone into an FM super-ninja in no time. It starts with the basics - perfectly explained, and delves deeper at a nice pace. I've been using Operator for years but still picked up a few tips in the later lessons. Taking this class will empower you to stop worrying about having the latest, greatest third party VST. Operator is a beastly synth. I rarely use any other synth because of the sheer sonic capability, and tight integration with Live.