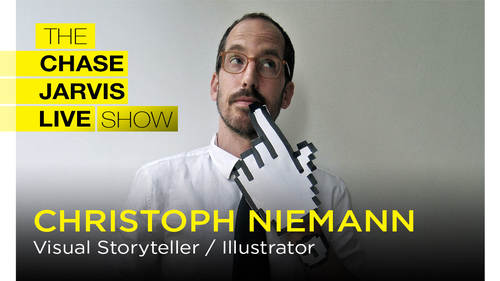 Creative Inspiration > The Art Of Practice

My guest today is the one and only, the inimitable, Christoph Niemann. If you’re not familiar with his work, he’s an amazing illustrator, artist, author and animator. I became familiar with his work from the covers of The New Yorker, National Graphic, and New York Times Magazine. Christoph’s art has been subject to numerous museum retrospectives. And you might have seen him on the Netflix show Abstract where they did a 45 minute documentary on him that is just spectacular.

Christoph has drawn live from the Venice Art Biennale, the Olympic Games in London, and he has sketched the New York City Marathon — while actually running it. He created The New Yorker’s first Augmented Reality Cover as well as a hand drawn 360 degree VR animation for the magazine’s US Open issue. Clients include Hermés, Google, LAMY, and The Museum of Modern Art. Suffice it to say, he is a legend.

Christoph Niemann (* 1970) is an artist, author and animator. His work appears regularly on the covers of The New Yorker, National Geographic and The New York Times Magazine. Christoph Niemann&#8217;s art has been subject to numerous museum retrospectives.
SEE INSTRUCTOR'S CLASSES