Lesson 10 from: The Beginner's Guide to Masking in Photoshop 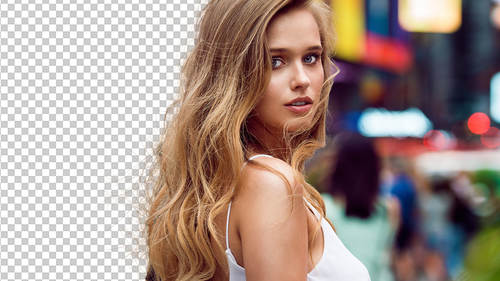 Lesson 10 from: The Beginner's Guide to Masking in Photoshop

10. Using Brushes to Paint in Detail

What are Selections and Layer Masks?

If we wanted to extract her from her background, we would have a really, really hard time because there's a lot of fine hair, right back here, that will be really, really difficult to select. And in some cases, even impossible. I'm not really sure why people think that you need to select every single strand of hair in a selection. You don't. Nobody's gonna know that it's missing. Also, a lot of times you don't have to make selections to actually create believable selections. And what I mean by that is that a lot of this hair will take you so much time to select and it wouldn't look good. Just because the background is so busy. Instead, what I recommend doing is actually painting that detail in later. So, in reality you're working with fake hair. It's not the real hair but it looks real. So, this is basically what that looks like with a different background. I still have all those strands of hair and it's fairly convincing. But it takes a whole bunch of layers to achieve. Some people th...

Probably mistitled as "for beginners" Moves very quickly, sometimes without clearly describing actions taken. This is fast paced and often assumes that the listener is very familiar with photoshop. Good tips if you are already familiar...