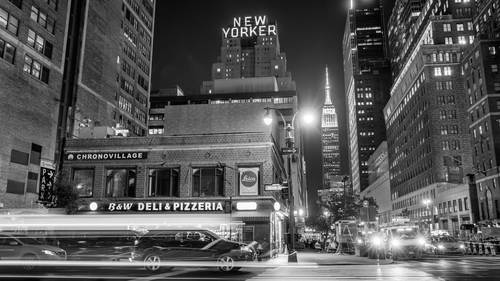 Welcome everyone, super happy to have you here at CreativeLive. This is Photoshop week 2019. And today we are going to be talking about being a better photo editor. And when I talk about photo editing, I'm not talking about editing your photos, as in like retouching them. We're not gonna talk about that at all. What we're talking about is the art of selection. So, we're gonna make all of you a better photographer when you leave this room in one hour, you will be a better photographer and that's true for all of the people out there on the internet, as well. Stick with us here and you will be a better photographer in the next hour, I promise you. Only if you follow my advice. You actually have to take what I tell you and do something with it. You can't just listen to it and suddenly you're better. So, I want to first talk about the idea of photography as an art form. So photography is a very unique art form because it's a subtractive art. It's not additive like, say, painting. So on a pa...

inting you have a canvas and then you start painting things in, you add stuff to this composition. Photography is the opposite of that. We have a canvas that is the whole world. We have something that already exist. And then we take pieces of that and get rid of the rest. So we're constantly removing things and that's our art, is by getting rid of stuff. So we either get rid of a lamp post that's over here on the right hand side. Or sometimes we position ourselves in a place where the person that we don't want in the photograph is behind the person we do want in the photograph. Have you ever done that? Like if you're photographing a person? I do it all the time on weddings. I'll be photographing and there'll be people playing in the background or something and I'll just position myself and get squatted down or whatever so that the person I don't want in the photograph is just behind the bride's dress. That's just how we edit. So I'm subtracting things from my photograph and that's how I make my art. Sometimes it's a matter of subtracting time. So I may have the perfect frame and I may have the perfect subject, but I'm waiting for the moment. So what I'm doing is I'm subtracting all of the other moments that could have happened, and I'm selecting that one moment that did happen, the perfect moment. And then I'm disregarding all of the future moments. So in all cases, as we're working in photographs, we are subtracting things, and that's how we get our art. So if we look at that as an art form, then I want you to look at these photographs. So this is a senior portrait. The kid is a dirt biker, he loves dirt biking, and so we photograph all of these things, but it's a subtractive art. I'm choosing which moments seem to be the best and I'm disregarding all of the other moments. Like for instance, there's a photograph that I took of the light that I was using to light him up, right. So I'm not gonna show that to people, even though I took it, I'm gonna get rid of that. There are other things in here that aren't quite as good as the moments that I love. So for instance, I love this moment right here. This is my favorite moment. And so that's the one that I wanted, but I'm photographing all of these other moments, and I'm skipping the moments in between. So I'm subtracting from time, I have an infinite number of options. I'm subtracting from the over all composition, I have a billion different frame options at my disposal. And I'm subtracting all of these things around in favor of the one thing, which turns out to be my favorite image of the entire set. Now, not only is it subtractive when we are photographing one subject. But think about the way you walk around a city. So these are images from Stockholm, Sweden. And if we were photographing the entire city, we would bore people to tears. But because we're selective about what we photograph, and what we show, we actually show the city to be very interesting and beautiful and I want to go visit this place because I've subtracted the best elements, or the most interesting elements out of the city and brought them back to you. And that's how to think of photography. When we're photographing, so here's an opera house. And this is an opera house in, oh, where is this? It's in Poland. And so, when I'm in this opera house, this is what's really there, there's a lot of people, and there's a lot of things and lights and all that kind of stuff is there. But we subtract all of that stuff out by framing ourselves so that we see only that. So you see how even as we're just moving around, we're subtracting even just with the camera itself, we're subtracting all of the unnecessary things around us. Because no one actually wants to look at that as a photograph. Now photographers might want to look at it to see how it was lit or something like that, but no one wants to look at that as a photograph. What they want to look at is that. And so our goal is, as the photographers, is to subtract all of the unnecessaries, and that's what creates a great composition. So I want you to think about that as you think about your photography, and coming back into the computer, when you're selecting because that's going to come into play in the way that you select your images after you've taken them.