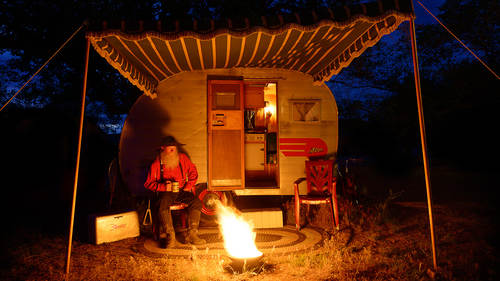 All right, then on occasion you'll be working on a document and you're gonna find that suddenly Photoshop stops working, and what happens when you attempt to do something is whatever it is you're trying to do, might be applying a filter, it might be moving a layer. A warning will come up that says, "scratch disk is full." What happens is Photoshop needs to contain your picture in your computer's memory. Your computer only has so much memory and if you start opening extremely complex images and you're running out of memory, you just don't have a huge amount of memory, then it starts using your hard drive as a substitute for memory and when it does that's know as your scratch disk. Your hard drive is much slower than normal memory so when that starts to happen Photoshop slows down but it can still continue working. Well you should, if you ever get that scratch disk is full message, which I won't be able to force to show up, it'll just happen when your hard drive is close to full and you'...

re working on a big picture. If you go to Photoshop, preferences, performances. Actually, it's not there. It used to be, I think. Come on. No, scratch this, now it has it's own section. Right here, it's going to tell you which hard drive Photoshop is going to use when you start running low on memory. This is where it's going to start storing information temporarily as you work. And it's when that hard drive fills up that you're going to get a message that says "your scratch disk is full" and cannot complete what you ask for. Well, the problem is, when that happens if you attempt to save your picture, your hard drive's full and you won't be able to save your picture. So what if you did a bunch of stuff to it that took you a lot of time and now you're attempting to save and it says, "hey your hard drive's full", when you try to save. You try to do something in Photoshop and it says, "your scratch disk is full". Well, there's a few things you can do. The first thing you can do is here in your preferences under scratch disk. If you have more than one hard drive connected to your computer then in here there will be a list of more than one drive. I only have one drive at the moment. But if you have more than one, you can turn on the check box for the other drives that are here. You can also change the order of the list and I would put your fastest drive at the top. Drives that are known as SSD Drives would be much faster than Spinning Hard Drives. And so if you happen to have any of those I'd put it near the top of the list. But if you always have more than one drive connected to your computer, I'd turn on the check box for the other drives. The only problem with that is this is only gonna start being used next time you quit and you start Photoshop again. So what can I do if I'm trying to save my image and it's saying, "my hard drive's full". Well, if it's saying "your hard drive is full", you can go to the edit menu and there's a choice in here, I believe it's in edit, called purge. Take me just a minute. Here it is. And under purge it's listing some of the things that it has to keep track of that takes up memory that aren't always completely necessary. One of those things would be the clipboard. It's grayed out right now 'cause I haven't copied anything. When you copy something it's stored in the clipboard. But if I had copied, let's say a huge image, it was a panorama, really high resolution. I select all. I copied and I did something with it and now I come to this menu and clipboard's available. Well if you choose it it would clear out what was on your clipboard, freeing up some memory. The other thing you could do is purge your histories. That means don't allow me to undo what I've done up until now. We still have the end result sitting there. We still have the layers that it's made from. But we can clear out the undo list which is what's found in the history panel and that would free up a lot of memory as well and that memory might be using up your scratch disk therefore it would free up some of your scratch disk space or we can purge all, which is everything that's in this list. And therefore that's one thing that could be done. If that doesn't clear up enough space where you can save your image yet then go over to bridge and in bridge, it'll take me a moment to find since not often that you go here, but if you go to bridge and choose preferences there should be an area in here called cache. And a cache is where bridge will store a bunch of previews for the images that you've browsed recently so that if you return to the same folder again in the future it doesn't have to inspect the images and create new previews, instead it already has them on hand. And so that mean there's a file in your hard drive that's hidden from your view that bridge is using to keep track of the thumbnails and the previews that it has and if you choose the section in bridge preferences called cache management, then right here is a button called purge all local cache files. This means gets rid of all those previews that I'm storing so that the next time I view a folder it's going to have to create the previews fresh which will make it take just a little bit longer to preview images but will free up a lot of space in your hard drive. You can find out how much by going up here to cache and seeing how high this number is set. The higher it is the more space it's going to take up. The other thing I would do if you still can't save is I would simply empty the trash. If you have anything in your trash or recycle bin when it comes to Windows, empty the trash to free up more space.