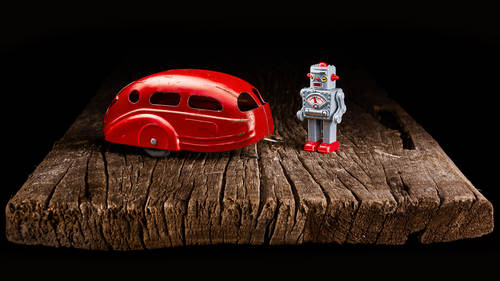 Now I'd like to add a little more flare to this image. What I'd like to do is add a drop shadow underneath the text. And add drop shadows underneath each photograph, so there feels like some separation between them and what's behind them. So I'll start by working on a photograph, here I'll just click on a layer, and if you're not sure which layer this is, which part of the document it is, you can always turn off the eyeball icon for that layer. That will temporarily hide the layer, and then just click on where the icon use to be, and it will come back. Therefore, I can tell exactly what's in that layer. I'll go to the bottom of the layers panel, and that's where I'll find the letter fx. And that's where I can add a layer effect. And I wanna use the one called drop shadow. When I choose drop shadow, a screen is gonna open full of options, and let's take a look what it takes to make a drop shadow. As long as this is open, you can click within your document and drag, and you'll reposition...