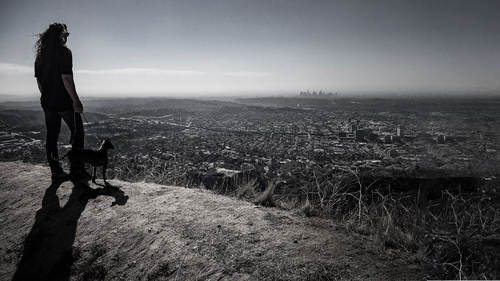 Here's our first. This is what I'm gonna be doing. So we have a picture, we're gonna extend the canvas, we're gonna fill in the canvas. And these are some I practiced on, I have extra lil' side stuff I can give ya but it's gonna be get the big stuff handled first big moves first just get rid of all that empty space all the scariness, all that screaming get it outta there, just conquer that quick as possible. Then instead of just the little dinky stuff from the get-go, do the big stuff, then do the little dinky stuff so step one, step two, step three. Just did a whole book for a friend of mine. Julian David Stone. So he snuck in a camera, took a bunch of backstage pictures during the '80s and he did, like, Prince, U2, The Police, the Ramones, he did a big coffeebook he had one slide of the Grateful Dead, Mr. Weir here and he was like, "Can you extend the sky and keep the edge work for the film strip?" So this was a job I was just asked to do not two weeks ago so it's a valid ask, it's a...