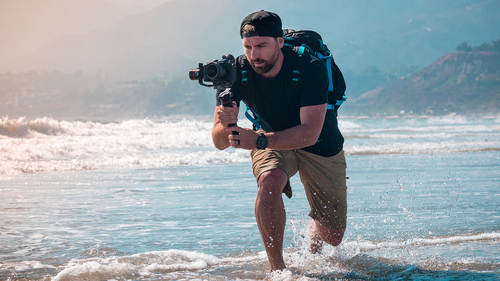 Business > Vlogging For Photographers > Where To Share Your Vlogs

Let's get into where to post your vlog. I'm gonna talk a little bit about brand first. I know the last live was about brand, but specifically brand is, to you as an individual. And I've been talking about this all as an individual, so vlogging from a person. Now you can vlog from a company, but you're not gonna be, it's not gonna be as strong of a video as a vlog because people want to be tied to a person. They don't wanna be tied to a brand. So you gotta think about your brand. If you have a photography business, while your vlog might be on the personal side of the business, and part of your vlog is running that business because people'll be more inclined to follow you as an individual than they will to follow a brand. When it comes, I mean, this is something that I wanna bring up. Social handles are hard to change later. If you go through and start doing it under one name and then try to switch it later, it becomes a big pain. So this is what I was saying earlier. I started under Won...

<b><p dir="ltr">Jeven Dovey is a filmmaker, YouTuber, world traveler and mountaineer based in Los Angeles, CA. &#160;He and his wife started a successful production company in southern California and he began his social media channels out of his love of travel &amp; creating content.</p></b>
SEE INSTRUCTOR'S CLASSES