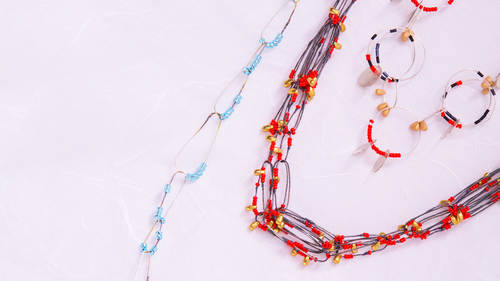 Adding Beads to the Wire

Got your links they cool off pretty fast those and from there you're going to start to do the next links and then link them together I like I actually like to shape these first so I get half of them so they're totally shaped so I'm going to do first is show this kind of link it's kind of like a paper ship paperclip shaped link where I'm taking them and just stretching them out and you can do that with different things and different sizes you can take two towels and these for the papers paperclip shape you want to have two of the same diameter dowell or you can use thes punches over here they're actually different diameters but you can get some if you want two of them to be different which will show you'll use different shapes are different diameters or like this you could also use pliers so if you have two pliers that around you can't have the needle nose round pilot you can use to pliers and pull them out so for the sake of this use these two towels on and actually I'm not I'm gonna u...

Create a chain link necklace and learn techniques for working with beads from Raïssa Bump in Wireworking with Beads for Jewelry Making.

Raïssa is a jewelry maker and in this beginner-friendly class, she’ll show you how to create a chain with bead details. You’ll learn how to:

Raïssa will share best practices for working with jeweler’s tools and discuss which materials are the best fit for the project. Don’t miss your chance to learn basic chain necklace making from a patient and experienced instructor.