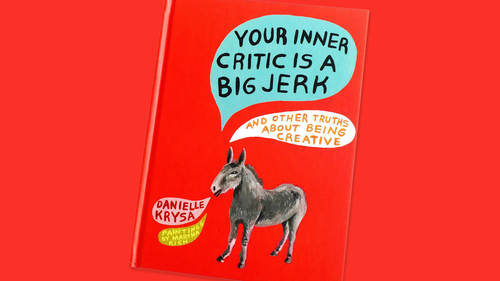 (audience applauding) Hello, welcome to CreativeLive. I'm really excited about our guest, Danielle Krysa. Danielle Krysa is an artist, graphic designer, writer, curator. She's the blogger behind the popular contemporary arts site The Jealous Curator. Has anyone heard of The Jealous Curator? (laughing) Woo-woo! I have. She's also the author of Creative Block, Collage, and her latest book, which is called Your Inner Critic Is A Big Jerk, all from Chronicle Books. And tonight she's gonna talk to us about her newest book. I'll pass it over to you. Thank you. Thank you guys so much for being part of this. I am so, so excited to be here, and to be here to share my story with you, and all the journey that I've gone through. (audience laughing) So I've been preparing for this, and can't wait to tell you guys everything that I've been through. I'm an artist, a writer, a curator, and I have an inner critic who is a really big jerk. (laughs) So that was just a little glimpse of the things...

Danielle Krysa is the author of Your Inner Critic Is A Big Jerk, Creative Block, and Collage, all published by Chronicle Books. She is also the creator of the contemporary art blog The Jealous Curator. In this lecture Danielle tells the story of the day she met her inner critic, the 15 year art-hiatis that followed, and the aha moments that eventually taught her how to work with that big jerk. She realized, after writing her first book Creative Block, that everyone hears that annoying voice from time to time (or all the time), but it’s how you two communicate that makes all the difference. Sometimes a little couples therapy is required, because let’s face it, whether you like it or not, that little voice is there till death do you part.

Some of what she'll talk about includes:

How timely was this class. I identified an inner critic that I had not fully realized. I know what to do with this part of me and excited to change the small little voice. Danielle shares her journey and how so many others have similar experiences. Good to know we are not alone and how to move beyond our doubts. Take this 45 minute mini class and see if you might find a nugget or two like I did. Enjoy!

Amazing Danielle!! Breaking those mental barriers and giving into your creative self is inspiring.

Thank you for this free video, I enjoyed it. I have decided to call my inner critic "Jack", that way I can say "Hit the Road Jack, and don't ya come back". I admire your tenacity and I appreciate hearing what you had to say and the questions from audience and your answers. Bravo!!!