A Love Letter to Human Potential 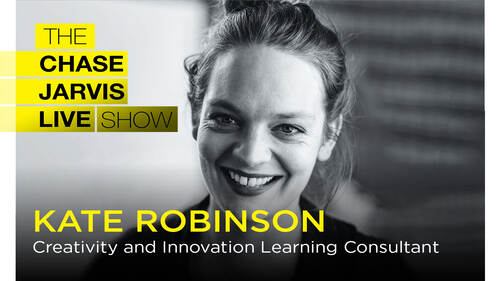 A Love Letter to Human Potential

A Love Letter to Human Potential with Kate Robinson

The natural world is based on diversity. The earth as a system depends on the diversity of nature to perform the countless roles required to create and sustain life. We tend to see ourselves as separate from nature, and our education system reflects that.

The American education system was created to suit the needs of the industrial revolution. The industrial revolution required certain types of people. In an effort to cater to the masses, the school system was designed to produce men and women who could work in a factory. Follow directions, stay in line, and continue to do things the way they’ve been done before. In other words, learn how to get along, conform.

A lot has changed since the industrial revolution, but our education system has not. Innovation depends on human creativity and diversity of thought. Imagine if our schooling system was designed to elevate and encourage people to pursue their own unique abilities, talents and passions. Imagine if everyone leaned into the unique creative power that lies within them. Would the world be a better place?

In 2006, Sir Ken Robinson gave a Ted Talk titled, “Do Schools Kill Creativity?” To this day, it remains the most viewed Ted Talk ever. Sir Ken challenged the way children are educated, and argued for a rethinking of the way schools and curriculum incorporate creativity, and acknowledge multiple types of intelligence. He believed in a school system that brings out the creativity of each child, rather than training it out of them. His life’s work was dedicated to imagining a better future. He believed the best way to do that was to celebrate and encourage the unique capabilities of human kind, specifically creativity. In 2020, Sir Ken passed away in the middle of writing the book his daughter (and podcast guest) Kate Robinson would later finish, titled “Imagine If.”

Kate refers to her father’s work as a love letter to human potential. On the show, Kate shares some backstory on her father’s life, and the journey that led to her completing his final piece of work. In Sir Ken and Kate’s perspectives, there are 3 myths regarding creativity that hinder our advancement as a collective.

The truth is, creativity lives in each of us, it is a muscle that can be trained and strengthened, and there is space for creativity in every activity. Sir Ken and Kate define creativity as “the process of having original ideas that have value.” It is an ongoing process of idea creation and evaluation, and it can be applied to anything.

The idea of changing a system as deeply ingrained as the education system can feel daunting. Kate encourages our listeners not to forget about the significant impact we can make as individuals by the way we choose to live and think. Society is what happens when children grow up. Everyone is a stakeholder in education and we should all be invested in what goes on behind the doors of schools. Revolutions do not wait for legislation, they emerge from what people do at the ground level. We cannot wait around for the government to change the way our country approaches education. We need to take it upon ourselves to promote creativity and advocate for systems that elevate people. Get involved, speak up, stand up for creativity, encourage children to think outside the box, and pursue their own unique passions.

True change comes from those who dare to imagine. Creativity comes from within, and progress comes from diversity of thought. Identify your passion, tap into your creativity, and encourage others to do the same.

Kate Robinson is a writer, speaker, and co- founder of a number of initiatives dedicated to the legacy of her father, Sir Ken Robinson. These include the SKR Legacy Collective Fund, to celebrate and remember Sir Ken and continue his legacy through projects around the themes of education, environment, and culture
SEE INSTRUCTOR'S CLASSES