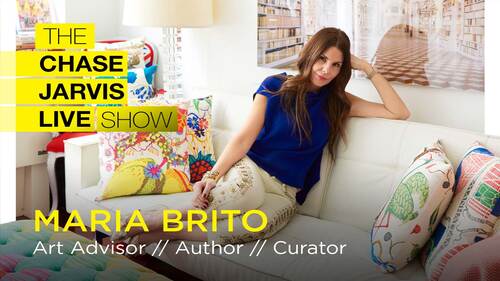 Hey everybody, what's up, it's Chase, welcome to another episode of The Chase Jarvis Live Show here on CreativeLive. You know this show where I sit down with the world's top creators, entrepreneurs and thought leaders and I do everything I can to pick their brain with a goal of helping you live your dreams. Our guest today is Maria Brito. Maria is a New York-based contemporary art dealer, collector and advisor and an author with a great new book called "How Creativity Rules The World, The Art and Business of Turning Your Ideas Into Gold". We talk about everything in this episode from brick-and-mortar galleries to the future of NFTs, how everybody is creative, yes, that's you and how you can actually turn your ideas wherever you are right now in the world, the gap between where you are and where you wanna be, how you can turn that into your future. It's an amazing episode, Maria, originally from Venezuela talks about not just art history, but making your ideas come to life in the presen...

Maria Brito is an award-winning New York-based contemporary art advisor, author, and curator. A Harvard graduate, originally from Venezuela. Brito has been selected by Complex Magazine as one of the 20 Power Players in the Art World she was named by ARTNEWS as one of the visionaries who gets to shape the art world.
SEE INSTRUCTOR'S CLASSES