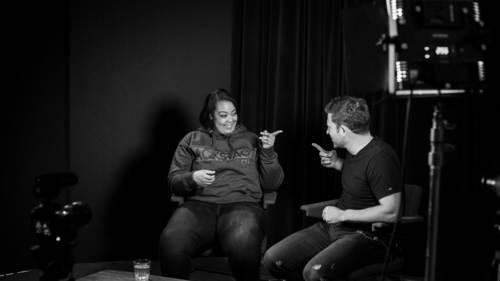 everybody. What's up? Your friend Chase? Welcome to another episode of the Chase Jarvis live show here on Creative Live. We all know this show. This is where I sit down with amazing humans and I do everything. I can't unpack their brains with the goal of helping you of your dreams and career and hobby. And in life. My guest today is an amazing story. She was on food stamps five years ago and has since built a company, a venture investment company with more than 30 employees across four states in two countries and has invested millions in start ups for underrepresented populations. My guest is the one and only Arlen Hamilton. Welcome to the show. Thanks for having me. Thank you. Do you love you? Appreciate it. So I First of all, I saw your your picture on the cover of Fast Company magazine in the fall. That was me and I immediately, you know, went right to the story was so inspired. It seems like both unlikely An amazing turn of events to be being on food stamps to be investing literall...

Through pursuing her curiosity and passion, Arlan’s found a way to create a living and a life for herself and work on a really tough problem: reconfiguring the ways that money and funding flow through these underrepresented and underserved populations.

Arlan Hamilton built a venture capital fund from the ground up, while homeless and living off of food stamps. Now she’s on the cover of Fast Company Magazine – and she has invested millions in startups run by people of color, women, and members of the LGBTQ community.

Love! I heard a bit of this, ran out and got the book, and came back to hear the rest. Thank you for your honesty and openness, Arlan, and thank you Chase for bringing this inspiring interview to CL.

She had a lot to share on her experiences and gave me a bigger insight of what privilege could be. I am grateful.