Skip to main content
photo & video
All Photography Classes > Fundamentals > Fast Class: How To Shoot With Your First Flash > Considerations For On-camera Flash

Lesson 13 from: FAST CLASS: How to Shoot with your First Flash 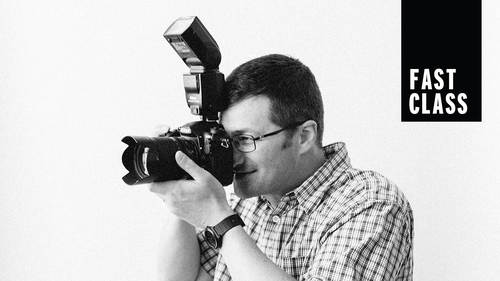 Fundamentals > Fast Class: How To Shoot With Your First Flash > Considerations For On-camera Flash

Lesson 13 from: FAST CLASS: How to Shoot with your First Flash

Well, let's get into now on camera flash. We're going to take some photos of our fabulous model, Andre. He's gonna come up here, and, uh and, uh, actually, Andre, wouldn't you Come on set, We'll introduce you, and then you can be on set while I'm talking through some of this Mr had Andre? Yeah, Cool. So this is fairly low key. He's just gonna hang out here for a while. I'm going to be shooting. Some test shots were tethered today, So you all Bill be able to see the photos that I create in real time again. This is on camera flash. And so I want to start out with a little bit of philosophy, and then I want to show you what not to do. I already told Andre the first photos I take of him are going to be horrible. Okay, They're not portfolio photos. You don't want to put it on your website. Please don't. If you do, don't put my name next to them. I talked about that, and then we're gonna just get better. I'm not sure how we can take great photos using on camera flash, but we're bringing refl...