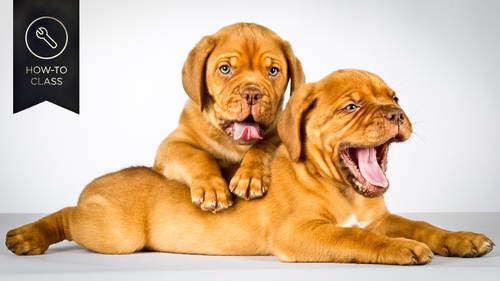 1. How to Photograph Pets in the Studio Show Transcript

Class Trailer
1 How to Photograph Pets in the Studio 1:07:44

Hi like jim said I am carly davidson and I am an animal photographer actually have a background in both animal photography, photography in general and a lot of animal care and training and I think that's really how I kind of fell into animal photography as much as I always loved photography I think it was around when I started photographing the animals I was working with at the oregon zoo that it really clicked that I was supposed to be photographing animals. So like I said, I have a background in animal care uh it's something that a lot of people ask me when they're interested in doing pat animal photography what they should do what here should I get what you know what should I have? And the first thing I tell them is that they should have a great sense around animals. So that tends to be somehow a lot more important than a lot of the gear because if you have an animal and that animal is not comfortable around here, you're not comfortable around that animal like nothing the work s o o...

Learn the trick to creating awesome pet portraits and assuring your non-human clients they aren’t at the vet’s office in Photographing Pets in Studio with Carli Davidson.

In this class you’ll get tips and techniques for creating an environment that sets your four-legged models up for success. Carli will teach you how to work with animals that are not professionally trained to be on set and cover ways to work with agency trainers to ensure everyone is on the same page. You’ll learn about lighting, gear, and environmental factors that are essential for an animal-friendly environment. Carli will also share a few easy training techniques you can use to encourage photo-friendly play from your furry friends.

Animal photography can be fun, playful, and profitable when you create an environment for it – learn how minimize the inherent uncertainty of working with pets and set your studio up for success.

Carli Davidson is both an internationally recognized award winning photographer and an experienced animal trainer and caretaker. She is able to capture the innate personalities of her subjects using her professional understanding of animal behavior. She is a freelance photographer
SEE INSTRUCTOR'S CLASSES

I enjoyed this class. I've been reading books on Pet Photography and felt this class was a great complement to my reading. It was nice just to watch her interact with the animals and get a feel for how a pet shoot might flow. It was also comforting to see that my two dogs are not the only ones who walk toward the camera when being photographed. I liked Carli. She was laid back and had a good demeanor for working with animals. For a short class, I feel it was very worthwhile. You will not be able to watch this video and then call your self a professional. I liked how the EXIF information was on each picture as it displayed on screen. Definitely worth the cost of the class.

I'm a big Carli Davidson fan and to be able to see her behind the scenes setup and how she worked with the animals and the advise she gave well worth the cost of the course. Carli is a success pet photographer and I'm glad this course was offered. The investment was well worth it.

Carli does a great job working with the pets, and you can see it's tricky and requires a ton of patience. Trying to getting the pets attention, and teach at the same time is hard enough, but it was fun to watch and re-affirming that my pet shoots are not much different. Having helpers is imperative, and lots of treats, pet toys and noise makers is a must. She mentioned that shooting 10 frames per second causes some dark frames due to flash duration at full power. I think she meant to say flash recycle time. Other than that, she's great with pets, and I enjoyed watching.