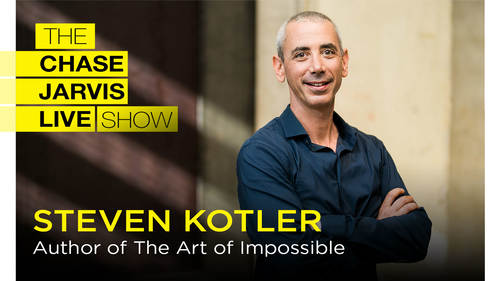 Mhm. Yeah. Oh we love you. Hello Internet and welcome to the chaser of his live show here on Creative Live brings me great pleasure to welcome you to our conversation today. And speaking of, before we get into that conversation, just a little bit of housekeeping, I want to welcome you to wherever you're viewing or from wherever you're doing this to Creative Live, where the world's largest and best place to learn from creators, entrepreneurs and thought leaders. And today we're sitting down with one of those folks if you want to ask questions, this is a live recording. So whatever platform you're on, whether you're watching it on facebook or uh instagram live Youtube live, you can type in questions and your friend here, Chase the moderator. I get to see those questions and will do my best to aggregate all of the info from all over the internet and ask a few pointed questions of our guests that you may have. So please share and participate in the conversation. The place where I get the q...

What if you could remove the limitations on what is possible for your one precious life? It turns out when you look into what is actually ‘impossible’ and tap into peak human performance, you’re capable of much more than you know.

Steven Kotler is one of the world’s leading experts on peak performance. He is an award-winning journalist and author of 9 national bestselling books. A two-time Pulitzer nominee, Steven’s work has been translated into more than 40 languages and has appeared in over 100 publications, including the New York Times, Wired, Atlantic Monthly, Wall Street Journal, TIME, and the Harvard Business Review.

Steven pulls from decades of research and in his new book, The Art of Impossible. Not only do we dig into the meat of the book, we also learn how to optimize performance levels, starting from step 1.