Lessons in Business and Life 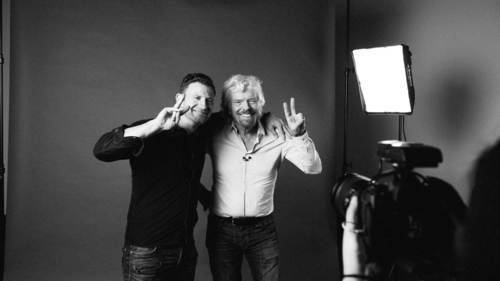 Lessons in Business and Life

1. Lessons in Business and Life with Richard Branson Show Transcript

Everybody has a going I'm chase Welcome. Another episode of the Chase Travis Live show here on Creativelive. You guys know the show? This is where I sit down with the world's top creators onto boners and thought leaders and I do everything I can't unpacked their brains to help you live your dreams and career and hobby And in life, my guest today is probably will definitely needs no introduction, But I'm just going to try and actually not given introduction because you'll know who he is. The second I say his name, it is the guest today, Sir Richard Branson. I see you love you. Welcome. You just got in yesterday from the other side of the pond I got in from Washington. Actually, I was trying to see if we could rally the World Bank and the IMF to help the Caribbean. That's been trashed from the Hurricanes. So And then, of course, I came here to watch Virgin Sport do a great performance. And now, uh, no Sonoma and Napa Valley being trashed as well. So strange. A strange The world is strang...

Drawing threads from his new book, Finding My Virginity, we talk about some of his recent projects as well as the steps he took to get from one stepping stone to the next. Sit down with Sir Richard and I as he uses stories to break down prioritizing your life, setting goals, and how to choose what to pursue.

If there’s anyone qualified to lay out the blueprint for dreaming big, living life on your own terms and turning your passions into your career, it’s the iconic Sir Richard Branson. He’s fearlessly and boldly disrupted one industry after another as the founder of the Virgin Group, from publishing to airlines to creating Virgin Galactic (the world’s first commercial spaceliner), building an empire of more than 100 companies and 60,000 employees in over 50 countries.

Sir Richard Branson is Founder of the Virgin Group. Virgin is one of the world’s most irresistible brands and has expanded into many diverse sectors from travel to telecommunications, health to banking and music to leisure. Through more than 100 companies worldwide, Virgin employs approximately 60,000 people in over 50 countries. Branson has challenged himself with many record breaking adventures, including the fastest ever Atlantic Ocean crossing, a series of hot air balloon journeys and becoming the oldest person to kitesurf across the Channel. He has described Virgin Galactic, the world’s first commercial spaceline, as being “the greatest adventure of all”.
SEE INSTRUCTOR'S CLASSES

Such a great interview. I have read all of RB books but still learned a lot and was re-inspired. I sat up and smiled at list new term "Alternative Thinker" for dyslexics. I am one.