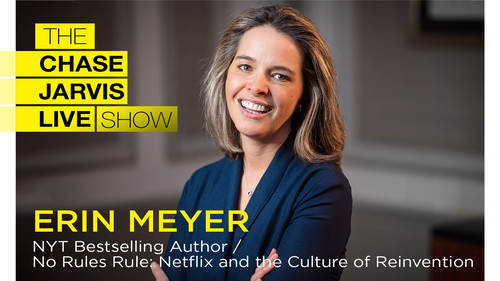 Creative Inspiration > Netflix And The Culture Of Reinvention

Back in 2009, Netflix Talent Officer Patty McCord and CEO Reed Hastings published a presentation called the “Netflix Culture Deck.” This 125 page deck, now has over 20 million views and created quite a buzz in the HR and tech world for its radical ideas that countered typical corporate culture such as vacation policy that equated to “take some,” a “do what you think is best for the company” expense policy, and mindset that “adequate performance will get a generous severance.”

And that’s where it started. Erin Meyer, my guest on today’s show, read that deck and found herself startled, confused, and curious. There has never before been a company like Netflix. It has led to nothing short of a revolution in the entertainment industries having to reinvent itself over and over again. How have these counterintuitive and radical management principles made such unprecedented flexibility possible?

Erin is an author and a professor at INSEAD, one of the world’s leading international business schools. I ran into her work several years ago when I read her book, The Culture Map: Breaking Through the Invisible Boundaries of Global Business. Her work has appeared in the Harvard Business Review, The New York Times, and Forbes. She’s been noted as one of the 50 most influential business thinkers in the world by Thinkers50.

Today we’re talking about her latest book, NO RULES RULES: Netflix and the Culture of Reinvention. Drawing on hundreds of interviews with past and current Netflix employees, among others, our conversation explores high performance teams and how we can apply their culture into our own lives.

Erin Meyer is the author of The Culture Map: Breaking Through the Invisible Boundaries of Global Business, and a professor at INSEAD, one of the world&#8217;s leading international business schools. Her work has appeared in Harvard Business Review, The New York Times, and Forbes.com.
SEE INSTRUCTOR'S CLASSES