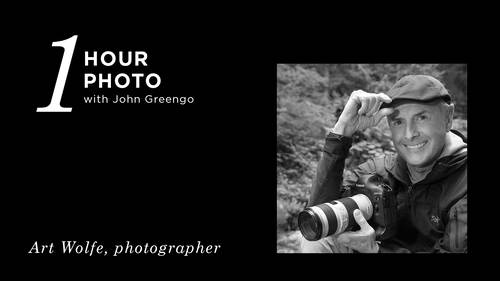 Alright, it is now time to welcome our guest on the show, Art Wolfe. He is a well-known photographer, internationally known for landscape, wildlife, culture, fine art, much more. He's won more awards, published more books than we have time for. Art, come on out. Thank you very much. Hi John. It's great to have you here. It's great to be here. And this is great to have you here. Now, you have a class. Now, people might be watching this in the future, so there's probably a class already on the books that's already done, and what's this newest class that you have going on, here? Well, you know I'm not a gear head but I'm actually giving a talk on how I'm using technology to improve my work. So it's everything from drones to the latest digital cameras, and focuses, and everything kind of geeky. And what's the name of this class? We have no name for it. (laughing) But it is rolled into two other lectures and one of which is called Photography As Art, which I've been giving aro...