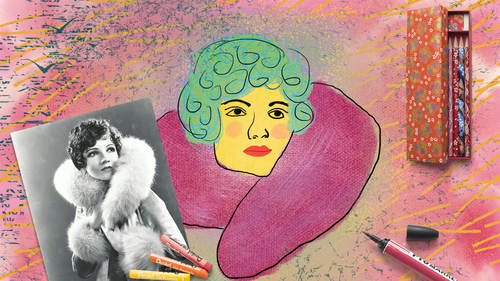 Let's do another fun example. We're gonna come over here to this Eiffel Tower picture. And let's say we want to reformat this into a vertical piece, so that we could put it in a frame somewhere that we've got already picked out. So we're gonna grab the Crop tool. Press C for crop. And I want it to just be a width and height that I can type in here. So from this dropdown, I'm gonna say that I want to affect the width and height and resolution. And I want the width to be 1500 pixels and the height to be 2200 pixels. Okay, and then I'll just commit that. So, here's the canvas that we're gonna be working with. Before we get started, we want to create a couple of new layers. First, I'd like to put a layer behind this. So, I'm gonna Command or Control click the New Layer button. And we'll fill this with white. So again, one way of doing that is Edit, Fill. Choosing white right here for the contents. And we click Okay. Then I'm actually gonna click up here and make a new blank layer on top. S...

There’s an enormous assortment of brushes in Adobe® Photoshop® that you can use to create everything from watercolor and gouache paintings to charcoal drawings to manga-style illustrations. In this course, Khara Plicanic will provide a quick overview of brush basics along with a guided tour through some of the newest and biggest crowd-pleasing additions. Follow along step-by-step to make your own custom brush from scratch, and don’t miss the super fun, totally foolproof, insta-worthy course projects.

Wow... I had been fiddling around with brushes for a while, but this Class propelled me into a stronger foundation of talent! Excellent class, easy to follow step-by-step instructions and clear directions! Thank you to Khara and Creative Live!

Loved this course! I needed the basics as a good foundation and this class gave it to me. It helps to use what is being taught as you go along. Khara is a great teacher because she builds your confidence as you work along with her.

This was a great class! I watched all of the lessons in one evening, and played along in Photoshop with the instructor's demo files. I was looking to gain new skills in using brushes, and I definitely learned a lot of new techniques and tools! Great instructor, too. She concisely explained all her steps and pointed out shortcuts and other tricks for using Photoshop.