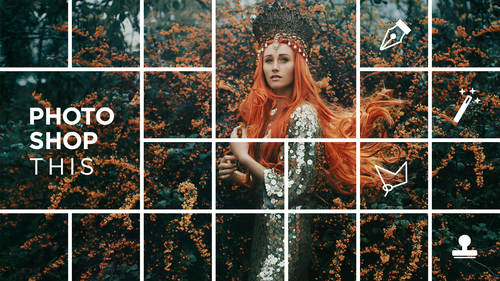 Welcome to Photo shop this 2017. If you've been here before, you know that this is crazy and not all that serious. But we have three amazing contestants behind me, and I'm going to give in them challenges inside a photo shop. They're going to have to compete in three minutes time on each of these challenges and see who could do the best job. And also who could make us laugh the most. So I'm going to introduce you to our contestants at that time. If you would mind introducing yourself and talking about what it is you dio on, why you are who you are. Alright. Quickly, though. So we're going to start over on my right with Lisa Carney Entertainment Advertising Re toucher, Finisher Composite er, what to do for a living, But doing it for about 25 years. Well, I'm who I am. You need to talk to my mama about that. Yes, and that's quite a story. And also a little known fact. She was a dancer on Footloose, so I think that tonight regional original Footloose is there. A second older is there's a ...

Photoshop This puts Photoshop Week instructors head to head in a race against the clock. You’ll watch as expert instructors take their own, unique approach to retouching the same image while the seconds tick away.

Don't have Photoshop yet? Get it now so you can follow along with the course!

Corey has been a well-known Photoshop instructor for the past 10 years but has been using Photoshop since version 2.0. He graduated from the Ringling College of Art &amp; Design In Sarasota, FL with a BFA in Illustration. He has since gone on to...
SEE INSTRUCTOR'S CLASSES

Maybe shouldn't admit this, but Photoshop This is one of my favourite parts of Photoshop Week. Maybe I'm too weird. But in fact there is so much learning (or is that teaching?) in three minutes - but each three minutes is really nine minutes. Fabulous instructors, brilliant results