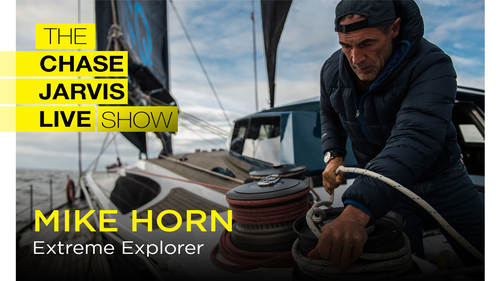 Today on the show I have a dear friend and arguably the foremost living explorer on the planet: Mike Horn. I have had the incredible fortune of traveling to some really amazing places with Mike such as the South China Seas, around South Africa and the Amazon on the coast of Brazil. Some of my most inspiring and best moments of my life have been tagging along with Mike on his adventures.

Mike is also one of the hardest working, stubborn bad-asses that I know. He’s explored the Peruvian Andes with a raft and a paraglide, crossed South America solo over 6-months, swam down the Amazon River in a hydrospeed, circumnavigated the Earth along the equator for more than 40,000 kilometers unmotorized by boat, bike, and on foot. He’s faced extreme temperatures crossing the North Pole during winter and climbed many of the world’s highest peaks such as Gasherbrum I and II, Broad Peak, Makalu; all without oxygen. Among his many adventures, Mike also works to share his knowledge, passion and experience with others through his youth mentorship programs, coaching, and media.

More recently, Mike and Borge Ousland were the first explorers to cross the Arctic Ocean via the North Pole in 87 days. Their progress was dramatically slowed down by open water leads, thin ice, strong water leads, all effects of climate change.
SEE INSTRUCTOR'S CLASSES