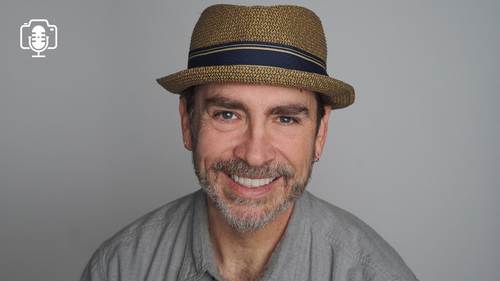 and hello, everyone. And welcome to Creativelive. I'm your host, Ken Klosterman. I'm coming to you from my home to yours, to our very special guest today, Daniel Gregory. Off course, This is another episode of our podcast. We are photographers where we take you to again the home studios, living rooms of our favorite photographers, film makers and educators all over the globe. And we talk not necessarily about gear here on this podcast, but about life, the Korean of life and what it means the ups and the downs eso that we all know that we are not alone in this creative journey. Eso if you haven't already be sure to subscribe rate like review. We are photographers wherever it is that you listen to podcasts and we love to hear from you as well as to who you might want tohave on. But if you are tuning in right now, we always love Thio. Do the shout out. So let me know where you're tuning in from whether you're watching on social media or if you are on creativelive dot com slash tv, click o...

In this episode, Daniel shares the elements of making meaningful work - voice, vision, signature and style. You'll find out how and why creativity is at the core of everything Daniel spends his time doing. We discuss the difference between living a life of photography and living as a photographer. We explore Dorthea Lange's wise words, "The camera teaches me to see" and how large format, alternative processes, and the darkroom allow an exploration of time. Daniel explains that when photography works, it puts us in the present - out of the regret of the past or fear of the future. You may begin to recognize a photograph as a relationship, something that is given to you not taken by you.

Daniel J Gregory is a photographer, mentor, and photo educator based just outside the town of Langley on Whidbey Island, Wa. He is a member of the core faculty at the Photographic Center Northwest in Seattle, Wa, where he teaches various photographic subjects, including fine art printing, color concepts and theory, portfolio creation, Photoshop, Lightroom, and a variety of analog photography courses. He has also taught classes for CreativeLive, KelbyOne, and has been a featured instructor at both regional and national conferences.

Daniel has always been interested in how photography helps us see, listen, and experience the world. His work explores the importance of developing meaningful connections to a place, person, or environment. These connections extend beyond just the work behind the camera or location but drive his decision methods and approach to the final print. Daniel views the photographic process as a collaboration between the subject, photographer, viewer, and the final print. Each one of these collaborators brings a part of the experience of seeing and immersing themselves in the work.

Daniel is also the host of the Perceptive Photographer podcast that focuses on the creative aspect and internal struggles photographers face creating meaningful work.

Daniel Gregory started his career working in the high tech industry. Wanting to have a more creative and passionate life, he left all those zeros and ones behind and
SEE INSTRUCTOR'S CLASSES

I love the work of Daniel Gregory and I own all his Creativelive classes. I find him inspirational and has helped me to return to analogue photography. This video is another example of his insight that makes me rethink the negative head space I find myself in at times. Thanks Daniel. You have no idea the difference you have made to my photography.