Surf, Survival, and Life on the Road 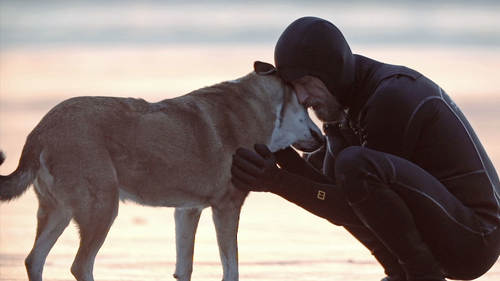 Creative Inspiration > Surf, Survival, And Life On The Road

Surf, Survival, and Life on the Road

Surf, Survival, and Life on the Road with Ben Moon

Since we’re home, I’m working to bring more LIVE conversations to you from our living rooms. Join me + adventure photographer / filmmaker Ben Moon at 12:30PM PST tomorrow. There will be a live chat, so please ask us some questions as well. See you there.

You might know Ben from his adventure and lifestyle photography or his beautiful films. Surviving cancer in his 20s gradually shifted his artistic focus from capturing the pursuit of adventure to telling nuanced human stories that have inspired and impacted millions. Most notably, his personal story battling colorectal cancer and his special relationship with his dog Denali, which he shares in his beautiful viral short film, now turned book, Denali.

Ben Moon is an adventure, lifestyle, and portrait photographer whose vibrant images have graced the pages of Patagonia catalogues for the past 18 years. In recent years, he has shifted his focus to filmmaking. In 2015, he founded his production company, Moonhouse as a platform for collaboration with friends and creatives to bring a wide range of thought-provoking, impactful and cinematically beautiful stories to life on-screen.

As a director, Ben’s unique ability to connect with his subjects paired with the talent and experience for visual storytelling allow him to bring a high level of emotional and visual depth to his films.

Surviving colorectal cancer in his 20s inspired Ben to develop a deeper connection to others and the natural world and gradually shifted his artistic focus from capturing the pursuit of adventure to telling nuanced human stories that have inspired and impacted millions worldwide. Most notably, he told his own story about his journey with colorectal cancer and his special relationship with his dog, Denali in the viral short film, Denali.

Ben currently resides on the Oregon coast where, in addition to his film and photo work, he is building a house and just published a personal memoir called “Denali: A Man, a Dog, and the Friendship of a Lifetime” on Penguin Books about his journey with cancer and his life with Denali.

Ben Moon is an adventure and lifestyle photographer turned director and filmmaker who uses his intuitive sensibilities to bring individuals and their stories to life. For over eighteen years his work has been featured in Patagonia catalogs and and because Ben is also a rock climber, surfer, and adventurer, his insights into the subjects he photographs are tangible.
SEE INSTRUCTOR'S CLASSES