The Art of Self-Reinvention

The Art of Self-Reinvention with Malcolm Gladwell 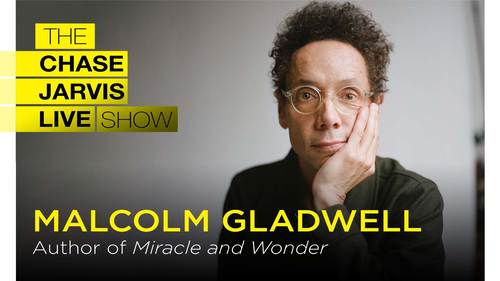 The Art of Self-Reinvention

1. The Art of Self-Reinvention with Malcolm Gladwell Show Transcript

The Art of Self-Reinvention with Malcolm Gladwell

Hey, what's up? It's your body Chase! Welcome to another episode of the show. This is the Chase Jarvis live show here on creativelive the show where I sat down with amazing humans and unpack their brains with the goal of helping you live your dreams and today's insanely badass guest is Mr Malcolm Gladwell of course, you know his work, things like tipping point, blink outliers, he is an award winning author, multiple new york times bestsellers, he's also into some new stuff audio, he has got an incredible podcast called revisionist History among a couple of others, and he's the president of Pushkin Industries where they are exploring all kinds of audio art and today's episode with Mr Malcolm. Gladwell features one of those pieces, uh a new work that he has collaborated with the one and only mr paul Simon, incredible piece and it's called Miracle and Wonder, We go deep on all sorts of things, his creative process, the creative process behind the legendary songwriter paul Simon, we talk a...

Malcolm Gladwell is the author of five New York Times bestsellers &#8212; The Tipping Point, Blink,Outliers, What the Dog Saw, and David and Goliath.
SEE INSTRUCTOR'S CLASSES