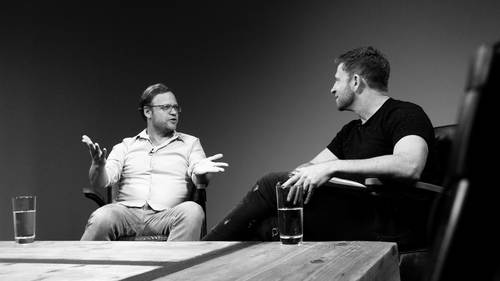 everybody. What's up? Different Chase Welcomed episode of the Chase Drivers Live show here on Creativelive. You all know this shows where I sat down with amazing humans and do everything. I can unpack their beautiful brains to help you live your dreams. Whether that's in career, in hobby or in life, my guest today is an artist. He's an activist, super long time friend of mine. Ah, very successful restaurant tour. Uh, and today we're gonna talk about his new book, which is gonna be a very powerful one. You need to prepare yourself for this. Let's talk about death over dinner, Michael, have in the house that you love you. So we've had thousands of conversations on couches all over the world at various times of day and night. Um and we said, We want our money, Continents. We've been together for many, and so I think this is gonna be a special discussion. I like, I think about the show is being special because I prepare for it. I feel like we have amazing guests, but the fact that you and ...

Let’s Talk About Death (Over Dinner) is a tactical guide for having the most important conversations with yourself and your loved ones about what you want when you die, but more importantly what you want out of life. This book and this conversation are about tapping into the human experience to help you live a more fulfilled and creative life. Thinking and talking about death will make you laugh more, bring you perspective and clarity into your life, and will bring you closer to those around you.

Michael Hebb is an artist, activist, restaurateur, long time friend of mine and probably the closest thing that comes to an expert on death. He is a hyphenated renegade, seemingly more comfortable swimming upstream and addressing taboo subjects than he is going with the crowd. He co-founded Portland’s unsanctioned underground food movement, was my co-conspirator for Songs for Eating and Drinking, and he recently wrote a powerful book about death that will change the way you view life.