The Power of Regret 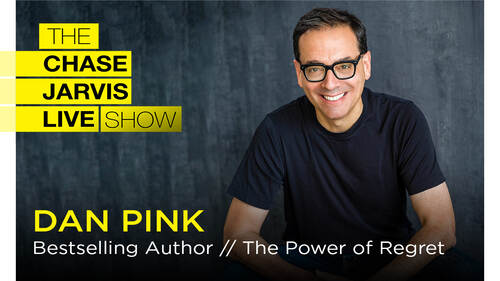 Creative Inspiration > The Power Of Regret

The Power of Regret

The Power of Regret with Daniel Pink

No matter how your life plays out, there will be situations that don’t go your way, things you wish you would have done, and words left unspoken. Yet, in a society where “no regrets” is culturally celebrated, we don’t often talk about how we reckon with those feelings.

It’s one of the reasons why author Daniel Pink became interested in the subject. He actually was writing another book at the time. He says, “I started thinking about regret and having some life experiences that made me think about it even more. I started doing the research, I threw that book aside and started with a new topic because it was so it was so compelling.”

Daniel Pink has written seven books, five of which are New York Times bestsellers. He was a host and a co-executive producer of the 2014 National Geographic Channel social science TV series, “Crowd Control,” and from 1995 to 1997, he was the chief speechwriter for Vice President Al Gore. Today on the podcast, he joins me for a conversation about his most recent book, “The Power of Regret; How Looking Backward Moves Us Forward.”

How to process regret

“The saying ‘no regrets’ is not only nonsense, it’s dangerous”, says Dan. Regret provides us with a key piece of insight into the world of ‘what went wrong last time?’ If we take the time to cognitively reflect on that question, without beating ourselves up about it, we place ourselves in a much better position to make a reasonable decision moving forward, and not repeat the same mistakes of the past. So how do we handle this retrospective?

A bias toward action

Regret can be a driving force for change if we conceptualize it in a positive way. Negative emotions exist for a reason, to be reckoned with. The more we suppress them, the more they eat away at us. But if we confront them, there is always something to be learned. The biggest regrets that people feel come from inaction, rather than trying something that didn’t ultimately work out. As a society we tend to over plan and underact. Dan reminds us that action is a form of learning in itself, and the data proves that taking a chance weighs lighter on the psyche than wondering what if. If there’s a sensible risk to be taken, take it. If you feel like you should reach out, reach out. Studies show the biggest regret of all, is the regret of not acting.