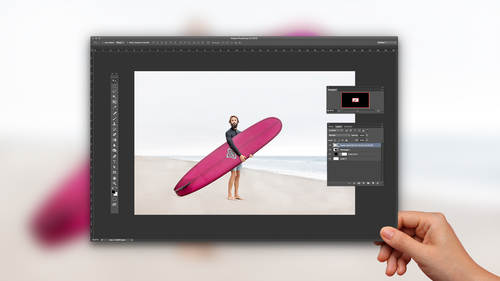 Crop and Compose Your Images in Adobe Camera Raw

Output and Save Your Work

for color. I want to talk a touch about White Mallon's first. We all know that they're different color temperatures like their lights in this room, some of them more daylight there. White. This this light wall over here is more yellow. And we know that from candle lights really yellow in the mornings, it's that blew cool, you know, light. And so we have this range of different colors. So one things I think about is there isn't necessarily correct color unless you're shooting a product and it needs to match sometimes correct color, maybe about the subjective mood, right? And other times it maybe I need to have accurate representation. So I'm gonna go to just fun with color for a moment. This is a chalk drawing that a friend. It's huge. It's probably, I don't know, six feet tall. We have this chalk festival, Santa Barbara called Modern Art, and this is her big drawing, and it was overcast. So there's a blue cast on this, and I I know she was using a white type of chalk here so we can use...

Highly recommended!! I have watched some classes taught by Chris Orwig before, and really appreciate his excellent teaching style. He truly is a master of his craft in both photography and in teaching. He taught at a pace that allowed me to take notes and absorb what he was saying, which I really appreciated. He was well organized, and thoroughly explained each step that he was taking. I have been editing photos since early 2002, but always worked with jpeg files. Even just nine months ago, I had no idea what to do with raw files. However, with the classes on raw processing taught by Chris Orwig, I have realized that shooting in raw and then processing in raw is vastly superior to working just with jpegs. I have even been strongly advising my friends to shoot in raw!!

I watched several of Chris’ tutorials elsewhere, before I discovered CreativeLive. Chris is a very student-friendly teacher, and he always seems to teach more than he intends to. For example, when he’s talking about software and retouching, you can get new ideas from his creative eye and unique view of the world and just seeing some of the creative concepts in the photos that he uses. That’s the main reason why I watched this video. However, although I’ve been using Adobe Camera Raw for about six years, I learned several “new” (to me) things about the software. As an introduction to ACR, this video will teach you more, in less than an hour and a half, than I learned in the first 6-7 weeks, when I first began using the software. It’s a very simple, logical and orderly presentation that’s easy to follow.

Chris Orwig is a great teacher for Photoshop. He is very engaging, very well-paced and gives you the information you need without being boring. :)