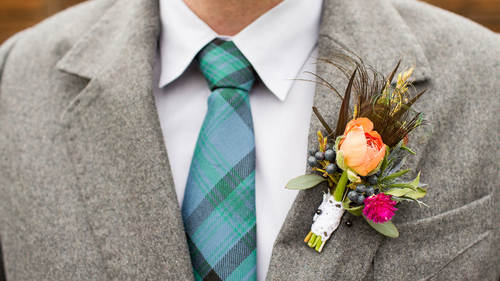 So now we're going to move on to making some chris taj is and to keep with our theme of what we started, I guess we can choose the same flowers, which are these lilies there nice and fluffy let's see, make sure everybody has some oh, you guys who have some lilies oh, good. Okay, so I'm going to choose thiss I'm going to yet again choose some run oculus do you guys harvard oculus? No ok, I can't take this should do some we'll do it explosion grass again because it's so pretty then we'll at kind of a green element to this to this because chris are just could be a little bit bigger than boot nears. Oh, you you have geranium. Oh, perfect. So we'll use some geranium and I think of chris charges is just kind of a bigger version of boot nears and some moms like to wear them on their chest and some like to wear them on their wrists, so I'll show you how I do the wrist part same idea let's take some of the ah paul in a awful the lilies moving the demon moving the state and we know what they're ...

Nothing captures the beauty of an individual flower quite the way a boutonniere or corsage does. Join Kiana Underwood to learn how to make stunning tiny arrangements!

This class covers the core design concepts for creating simple and elegant boutonnieres and corsages. Kiana will teach you how select, prep, and assemble flowers so you end up with simple, durable floral accessories everyone will admire.

This is an interestingly style. Very garden style. I would have liked to see an example of more formal style as well. Some good ideas to keep them fresh