Delicious Food Doesn't Have to be Complicated 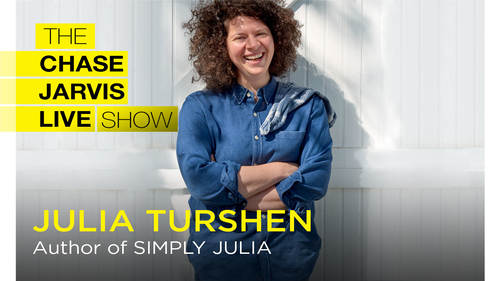 Delicious Food Doesn't Have to be Complicated

Mm hmm. Mhm. We love you. Hello, Internet. And welcome to another episode of the Chase Drivers Live show here on Creative Live. Hopefully you know the show by now. This is where I sit down with the world's top creators, entrepreneurs and thought leaders. And I do everything I can to unpack their brains with the goal of helping you out of your dreams and career hobby. And in life, I am over the moon with our guest today before I get to her. Just a little bit of housekeeping. I want to welcome you from whatever platform you're viewing on whether that's Facebook instagram YouTube, live stream to a bunch of them, uh, and let you know that if you are typing in the comments, I can see those comments and questions, and I will do everything I can to elevate them to our guests so that this can be an interactive, interactive experience for you all. And I also will put a little Astra's in there, which is the place where I see those questions. First is at creativelive dot com slash t V. So if you'...

Julia Turshen is the bestselling cookbook author of Small Victories (named a Best Cookbook by the New York Times and NPR), Feed the Resistance (Eater’s Book of the Year, 2017), and Now & Again (named the Best Cookbook of 2018 by Amazon). Her latest, Simply Julia, will be out in March 2021. She hosts the IACP-nominated podcast ‘Keep Calm and Cook On’ and has written for The New York Times, The Washington Post, The Wall Street Journal, Vogue, Bon Appétit, Food & Wine, and Saveur. She is the founder of Equity At The Table (EATT), an inclusive digital directory of women/non-binary individuals in food. Julia lives in the Hudson Valley with her wife and pets.