Lesson 1 from: FAST CLASS: Designing Your Life: How to Build a Well-Lived, Joyful Life 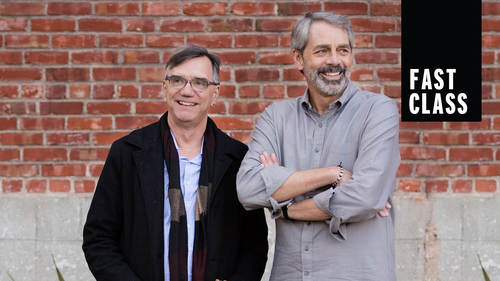 Lesson 1 from: FAST CLASS: Designing Your Life: How to Build a Well-Lived, Joyful Life

So welcome to Designing Your Life, and probably if you're like almost everybody we've worked with before, the first thing on your mind are a couple of questions. I know you might be wondering like "Is this course really for me?" "Am I in the right room?" and "Should I stay online?" Okay, we've got some answers to those questions. Well, if you sound like this. If you sound like anybody saying something like "Hey, you know, I'm in transition" "I could use some tools" you know, "I'm starting to wonder maybe it's time for a change". Hey, you know, "Life's good, but I'd like it to be a little better" "I'm not quite sure how to do that" and, you know, "I'd just like to make a move," "but I don't know how to start". If that sounds like you, you're in the right place. What situation are you in? Hey, if you look like any of these people. If you're like recently out of college, you're just getting started, you're early in your career, not sure what the next move's gonna be, you're right in the m...