Lesson 1 from: How An Unconventional Path Got Nabil Ayers To President Of One Of The Most Influential Music Labels 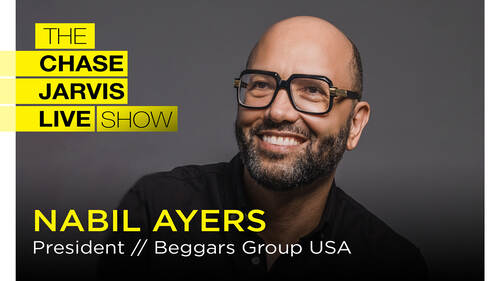 Lesson 1 from: How An Unconventional Path Got Nabil Ayers To President Of One Of The Most Influential Music Labels

1. How An Unconventional Path Got Nabil Ayers To President Of One Of The Most Influential Music Labels

Hey everybody, what's up? It's Chase. Welcome to another episode of The Chase Jarvis Live Show here on CreativeLive, the show where I sit down with incredible humans, and I do everything I can to unpack their brain with the goal of helping you live your dreams. Today's guest is Nabil Ayers. Now Nabil is many things, among them, an author, an entrepreneur, a record executive, and that's where I'd like to sort of focus in why you should care about this episode. We all are multi-hyphenates and you are gonna hear about the person who is now the president of Beggars Group, the label that has legendary bands like Radiohead and the National Grimes and dozens more that are absolutely legendary and impactful in the music world. But where Nabil really stands out is his ability to talk about, share stories and insights from his childhood through a mixed race, where he knew, despite being at a small liberal arts college in Washington, that his life was meant to be different than many of those in h...

Nabil Ayers is the US General Manager of Beggars Group label 4AD where he has run campaigns for The National (GRAMMY award winner in 2018), Big Thief (Grammy&#160;nominee in 2020), Grimes, Future Islands and St. Vincent as well as reissue campaigns including Pixies&#8217; album Doolittle which was certified Platinum in 2019.
SEE INSTRUCTOR'S CLASSES