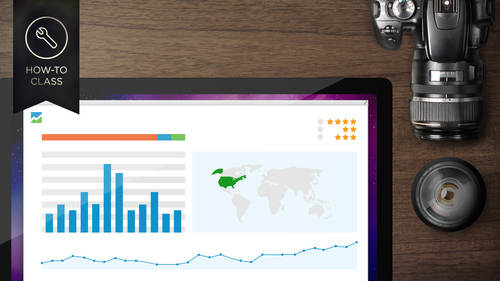 1. How to Improve Your SEO Show Transcript

Class Trailer
Now Playing
1 How to Improve Your SEO Duration:1:19:16

Okay, nerd wars I call it nerd war is just because I was one of those things you always kind of fighting, you know for it so I'm a big nerd I love star wars and star trek and doctor who and all that stuff. So if you have any star wars related questions, you could put those in the ask and I'll, uh see if I can do star wars trivia for you. So before we start, let me start with a disclaimer about you because it is this it's the unicorn of business right now, everybody wants really good asio they want to turn up in those searches they want to be, like, found but in photography if you are a boutique business and if your prices are like high, like if you're a wedding photographer, reporter, photographer and you're really kind of what you call high end uh seo may not be the best thing in the world for you. You will get more enquiries and you will get more hits on your web site. But you it's not pre qualified it's not like other leads or referrals if anybody khun type in the words seattle phot...

SEO, or search engine optimization, is one of the most effective tools for identifying and connecting with new clients — but it only works if you know how to do it. Gary Hughes will share his experience and years in IT and photography to bring it all together for you. In this class, you’ll learn how to build an SEO strategy by choosing the right keywords, optimizing your website and building relevant links to drive traffic to your site.

As the child of photographer parents, it's ironic that Gary's career included everything but photographer until life led him back to the path he was ultimately destined. In 2008 he and his wife, Julie, founded Hughes Fioretti Photography
SEE INSTRUCTOR'S CLASSES

Great Great SEO video from a super funny and great guy. I've been wanting to take Gary's SEO class as long as I've known him, but never got the chance. The information in this video is priceless. Talk about the lightbulb going off on how to approach creating and managing your SEO strategy. Great information, highly entertaining with some very awesome custom artwork to boot.

Just loved the course! I didn't know anything about SEO and in one hour I feel I've learned enough to start applying it and continue by myself. I understand better now how Google prioritize the information (the criteria), what I should look for in order to select the keywords and what is relevant for my website to be found. I believe it was a great foundation on SEO. The instructor was super funny and very clear. Highly recommend this course.

I'm surprised there aren't more reviews on this! Great course by a very fun, charismatic coach. The information given is going to be extremely useful for all the sites I have in my portfolio -- it teaches you more than just 'how to do it' it teaches you how to think as you approach SEO, making the relevance last, even as the search engines change their formulas. Highly recommended, and worth the price!