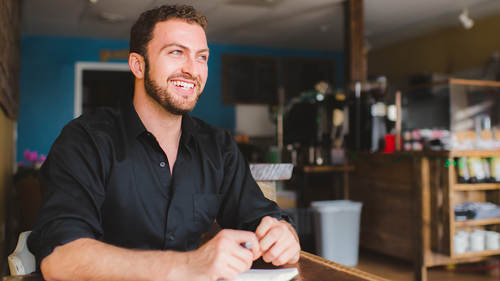 6. Dealing with Overwhelm, Indecision and Guilt

(Dave sighing) Here was our collective gasp from earlier. (audience laughing) Dealing with guilt, but also by extension, overwhelm and indecision. So before we jump in again, please join me. Let's take a resetting breath. I see you guys instinctively sitting up nice and tall, there we go (Dave breathes deeply) Wiggle the head up out of your shoulders. This is really just about kind of moving out of our heads, this very thinky head space and getting back into our bodies, the physical embodiment, where our feelings can help inform us of what else is going on. So as you sit up nice and tall, maybe closing your eyes, let's take three breaths together here. So when the next inhale finds you, breathing in deep, feeling the breath coming in through your nose, fill up. (Dave inhales) Open your jaw, exhale with a sigh. (Dave exhales) Twice more, just reset. Inhale. (Dave inhales) Feel the expansion, exhale. (Dave exhales) The contraction, the groundedness. Inhaling again. (Dave inhales) And e...

xhale, letting it go. (Dave exhales) Before you fall asleep on me, you can open your eyes. Come back to the room, thank you very much. Simple little reset before we jump into guilt. So as I mentioned, the collective gasp as we were developing our word bank earlier. So guilt seems to be a hot button topic, Seattle. We're gonna dig into that together. But also with guilt, overwhelm and indecision, so let's go over those top three scripts again that I have attributed to being... Directly correlated to this shadow. "I don't know which direction to go or what to choose." That was verbatim what we put on the board, right? Overwhelm, indecision. "I'm not sure what I want from my writing." So again, what's the point of it all? What's it really gonna lead me to? "Am I even allowed to want this?" There's the guilt script coming up. Give me your baggage, people. Who of you has felt like this has been your form of avoidance? Can we do, just quickly, a basic show of hands? Have you guys heard yourselves say these things lately? About half the room, very common right? These are all human experiences that we're experiencing through our writing, so it doesn't mean that you're broken. It's just gonna happen at some point or another, and with different projects, with different things that are going on in your life, these scripts are gonna come up. I saw a hand go up. Would you mind giving us an introduction? Can we pass the mic to her please? And your name. I'm Karen. Hi Karen. Hi. So tell me about the indecision, the overwhelm, or the guilt that's been goin' on for you. So many ideas, how do you focus? And they've been done, how am I gonna do them differently? So the indecision there. Absolutely. And then, the fact that I didn't do it, now I'm feeling unproductive and guilty, and-- So kind of this cycle. I don't know what to choose. Because I don't know what to choose, I don't get anything done. Because I don't get anything done, I feel like I'm just a waste, a waste of space. Not as you are, of course not. That's what I would say to myself. Yeah, a really daunting cycle. Thank you very much. When we're dealing with guilt, overwhelm, and indecision, this is the shadowy behavior, which means usually that we need to lean on our wanting and our desire as a natural source of direction, of movement forward. This is really hard because it runs counter to the writing advice we tend to hear, which is that before you get started, you should know what your genre is, you should know who your audience is, you should develop a brand, a platform around that audience. You should know it all ahead of time, as if the path doesn't change. As if your own tastes are maybe still being informed. So how do you actually start going somewhere in a way that you feel productive, like you're being creative and it's contributing towards a future that you desire, without really knowing ahead of time where it's going? Typical writing advice tends to think that you need to know what you want, like you're plugging in coordinates in Google Maps. And really, what I want you to reconsider when you're feeling indecision, when you're feeling guilty, is that the answer is just however you're feeling, and to allow what feels good, what feels rewarding, what just feels like maybe you just wanna feel it, to inform the direction. So instead of thinking of the direction as being linear, and being about accruing 10,000 hours of experience until you're a master, to think about allowing your creative whims, this power that we possess as writers, to explore, to experiment, to play, to feel just because we can, because we're human, because we're alive. To do some informing for us so that the things that feel like, oh, this is interesting can help us understand that maybe there's some more potential that comes, but we don't need to think about where it's all going quite yet. Right here and now, if you're dealing with indecision, overwhelm, or guilt, the answer is to allow yourself to feel whatever you're feeling through your writing, and as a result of your writing, to not be burdened by the overwhelm, and to kind of flip the script, so that instead of trying to be on a linear trajectory towards a final destination like you're plugging in GPS coordinates, to just feel and see where that's all going.