Lesson 1 from: Adobe Photoshop Blend Modes Will Change Your Life 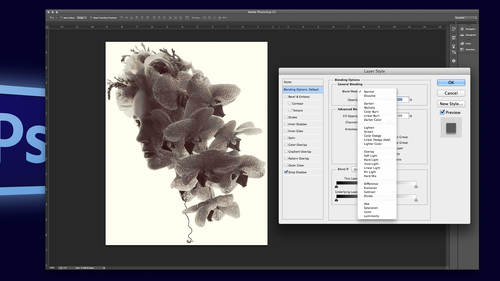 Lesson 1 from: Adobe Photoshop Blend Modes Will Change Your Life

If you don't use blend modes regularly, you're going to love this and say, holy crap, I didn't know how easy that wass, um, blend modes are awesome, and honestly, I didn't know about glenn modes like, really how you could use them until maybe I don't know, maybe three years ago, um, I just didn't know they existed, so I'm going to show you what they are and how they can play a role, not just in creativity, but also impracticality I I love them, and I mean that sincerely okay, so now that I said that, what our blend modes alright, blend modes change how pixels interact with one another, which sounds really fancy, but the two main applications is it changes how layers interact with one another and how a brush behaves that's the gist of it, but then there's a torrent of ton of different things, so I'm going to go to like, not the more scientific but like kind of break it down. Really? The easiest thing to do is demo, but let's, take a look so there's blend modes four layers adjustment lay...

WOW, JUST WOW!!! this is amazing, i love the non destructive methods, this really is a life changing thing for photoshop enthusiats, saves so much time, thankyou, i have loved all your classes, just amazing!!!

Her knowledge is obviously amazing and her experience has her moving really fast; this is NOT a class for newbies....I know a little bit about blending photos; enough to make me want this class; but I was over my head. I paused, wrote, paused, wrote, etc. and came away impressed and totally over-whelmed. I can't even read my notes! Luckily I can watch again--and again and again, ad nauseum, until I can finally grasp the techniques involved. Class is for confident intermediate or higher (experience).

Interesting, fun and creative. Will it change your life? Well, only if you are shooting portrait/editorial. There is no material covering other genres here. Fun material, even if it wasn't as helpful as I hoped.