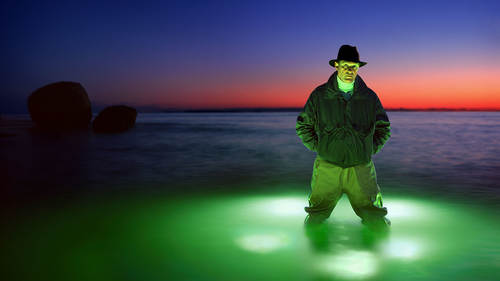 Welcome everybody to CreativeLive. I'm so thrilled that you're with us. My name is Drew Konzelman. I'm one of the hosts here and this is Photoshop Week 2018, so if you're watching online, thank you so much for joining us. Thanks to everyone here. I hope you all have a beverage, and have made yourselves comfortable, make yourselves at home we love that you're here. Tonight is a pretty special night. I'm really excited to get to introduce a guy who has been working at the very highest levels creatively for more than 35 years. I can say I'm not even 35 years old, and not many of us that are 35 years old have done anything consistently for 35 years, much less make a huge impact creatively, and this man has done just that. I really do believe that we are hardwired to be creative. If I read a list of this guy's accolades he wouldn't have any time to share tonight, but a few things that really popped out to me from his career and from his life, he shot 70 covers, seven-zero, for Time magazine...

CreativeLive is honored to welcome world-renowned photographer Gregory Heisler as the In Focus speaker for Photoshop Week 2018. With a career spanning over 35 years, he is known for his evocative portraits, numerous magazine covers and has been the recipient of many international awards.

Gregory joins CreativeLive to discuss standing out as a photographer and embracing your style.  Your job security is your uniqueness and there’s never been a better time to be a photographer.

<b><p dir="ltr">Renowned for his technical mastery and thoughtful responsiveness over a career spanning more than 35 years, Gregory Heisler's enthusiasm, curiosity, and drive are manifested in his hands-on approach to all aspects of the image making process.</p></b>
SEE INSTRUCTOR'S CLASSES

Just watched this over 3 sittings and I feel absolutely inspired. This talk really strips away a lot of the insecurity around 'how to present yourself' and just makes it all very do-able because it's already in you. Really interesting and funny speaker with some great insights, I highly recommend this for any photographer and in fact any creative making their way in the world.

I LOVE this guy! I would so enjoy being among his students. Inspirational, funny, knowledgeable, experienced, and a little goofy in a delightful way...

This was a fabulous class. What down to earth, fantastic advice for any photographer. LOVED it!