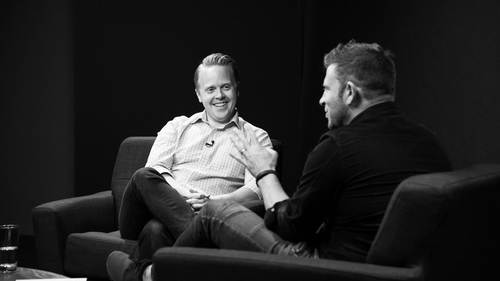 Everybody held. Go when I'm chased. Jarvis. Welcome there. So the Chase Jarvis live show here on Creativelive is no. This show is the show where I sit down with the world's top creators Entrepreneurs thought leaders and I do everything I can to unpack their brains and help you live your dreams and career in hobby and in life. My guest today is the author of Countem Five books Most recent tour we're gonna be talking about here One is called The Art of Work In the 2nd 1 Rial artists don't starve My guest Jeff Coins Chase. Welcome. Thanks. Having me I love you happier here. Got to be here. Long time coming to write. The book's been out for a little bit, like bit. Yeah, you can see after three months like that and I will confess. I don't know. This is like disclosure thing, but I got advance Copy. We have a lot of ah, same friends. Jeremy Coward, Ryan Holiday Holiday. Of course, a lot of folks been on the show, so I got to see this thing early and a congratulations. Thanks to feel good. Li...

Originally from Chicago, Jeff moved to Nashville after graduating from college and spending a year traveling with a band.In college, Jeff studied Spanish and Religion and spent part of his Junior year in Spain, which unlocked a passion for travel,
SEE INSTRUCTOR'S CLASSES