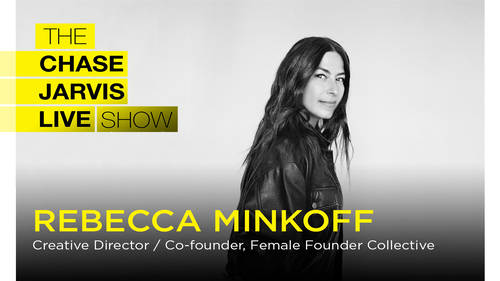 Hey buddy, what's up? It's Chase! Welcome to another episode of the Chase drivers live show here on Creative Live. Amazing episode for you today. Today we have Rebecca Minkoff on the show. If you're not familiar with your work, luxury handbag, designer accessories, footwear, fashion, apparel and so much more. She's a host of an incredible podcast. She got a new book out called Fearless, but less about the what Rebecca Minkoff has achieved and more about the how in fact she Left her home and moved to New York with two suitcases at 18 to pursue her dreams. The fact that when the pandemic hit like so many of you out there, she had to completely reinvent her business. The how what goes into making someone as not just successful on the professional side, but as a parent and as a leader with her female founders collective in inspiring other women entrepreneurs out there. I know you're going to love the story about how Rebecca Minkoff made the living and life that she has for herself, shows t...

At 8 years old, Rebecca Minkoff’s mother refused to buy her the dress she wanted, offering instead to teach her to sew. At an early age, Rebecca learned the value of doing things on her own, and once she got started, she couldn’t stop.

Rebecca is an entrepreneur in the fullest sense; a fashion designer, author, podcast host, wife, and mother. In this episode, Rebecca recounts her journey, and shares insight on how she’s able to juggle so many things while operating at such a high level.