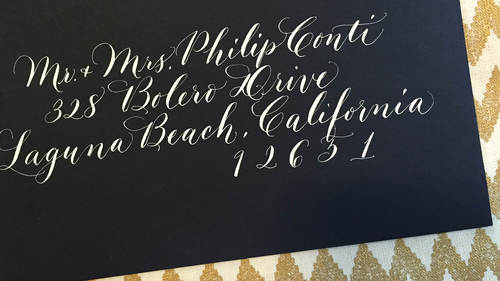 Now we're gonna dio navy with white on dh for these you can do it you can do a couple things obviously the the white board isn't gonna help me on the situation. This paper is just simply is not opaque so what I do is I draw the lines on and then I go back and I race um um you can do a few different things or a different ways like to achieve that same thing you can do what's called a ghost writer well that's what it's called and reflects the lines onto your paper to me it's just not my preferred tool I would honestly rather draw the lines on and go back into racism you can also use like a slighter but a slider writer that's ah said what it is ok, so it's like basically has like a laser that's on the side and it adjusts and it just kind of you know, you can see the lines from there yeah, but I have actually not try that one I would definitely be interested in that one is just not something I've really gotten around to. So for me my well method is working out just fine um one thing you kh...