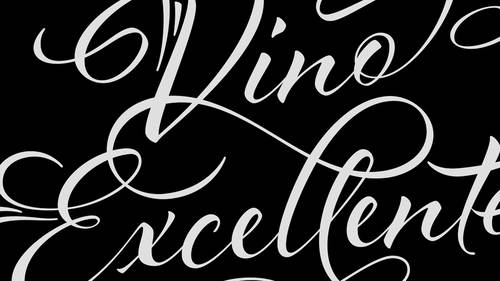 What Makes a Good Flourish

Revise and Refine with a Pencil Skeleton

All right, so, you know, it's something that I am something that I absolutely love about flourishes. And I think that air, so fascinating is that I consider them to kind of, like, be the gateway into lettering in calligraphy. There's the one thing that really takes a person from being a casual on looker didn't saying, oh, I really love that lettering. It's really beautiful into oh, my gosh, I want to learn how to do that, you know, they see what you can do with it. These these grand, beautiful, expressive flourishes and not work and really interesting stuff, and that usually is what gets people really excited and really hooks them into flattering. But, you know, besides just the aesthetic beauty of flourishes there's, so much more you can do with it, then that there's, you know, they function beyond just pure aesthetics. You can use flourishes to create structure in your compositions and your layout. You can use it to create containers and shapes in which little bits and pieces khun si...

tting there, and, you know, in general, it just adds this really expressive custom look to our lettering, and I think that that right there is one of the most important things to make a point of is that, you know, in our in our our journey to really express ourselves as individuals being custom and doing something that is outside of what's usually expected is one of the most important things that we can dio and this is where we get flourishes so you add expression to your letters and there's just again flourishes are amazing with what you khun dio and it's important to really I believe break it down to really simple elements because they're very complex I'm sure that all of you have looked at flourishes and thought wow how do you even begin to get some of these things and you know flourishes there almost like an and also that in and of itself you know in addition to learning you know the you know a through z now we have all of these other flourishes and letters that operate to kind of some with their own rules and so we have to learn how to break it down to most simple elements and structure and learn how to build them ourselves how to make them really work with our lettering and teo just really bring it to the next level so what we're gonna learn in this course is flourished construction you know how do we make these where do we put flourishes you know they look great but gosh you know how do you even start with that s o where to wear and how to add them in on in flourishes operate differently depending on what you're using what letters there they're coming off of you know are they coming off of lower case uppercase numerals they operate to their own set of rules they do different things it's embellishments and ornamentation you can kind of think of embellishment in ornamentation with flourishes as almost being disembodied they basically look the same as regular flourishes they're just not connect did you know but they're important because they're did these design elements that come in with the same look feeling style developed from the same hands to really bring your layout together in a way that's really meaningful and it has a lot of impact so the way that we get into this too is we really want to plan the stuff out we'll practice using what's called the pencil skeleton and we'll also teach you howto actually letter the flourishes you know once you've learned how to construct them and make them the actual way that you hold your brush and the method in which you make those flourishes is in a whole new skill to learn we'll get into revisions and refinement and really making those flourishes look absolutely incredible so with that said yes yes I want to let people at home know how they can participate with us here as we are here during the live class of course we have our in studio audience but we also want you at home to be very interactive as you are learning how to do these flourishes and ornamentation so we want to have you ask questions and chat with each other you can do that by clicking on the on air tab that's beneath the video player you're watching there's a box for questions that you have directly for laura as well as a chat box that you can opens up another window and you can ask us questions about concord of life works or share tips with each other but most importantly we want to see your work this is such a visual class so we want you to use the hashtag creative live design that's as chad creative live designed one word and we will be looking at some of your work throughout the class and beyond so looking forward to seeing as you guys are creating throat cliff thank you wonderful thanks all right so left and again with that said I would absolutely love to see what you guys were doing out there please sense and stuff and again just like kind of said it's so much fun to see with the online audience is working on

Laura Worthington is a typeface designer from Washington State. After training and working as a graphic designer since the mid ‘90s, she turned her lifelong fascination with lettering and typography into a business, publishing her first typeface in 2010. She has since published more than 80 typefaces, and designed custom faces for Fortune 500 companies. Laura’s faces are primarily based on her own hand-lettering and calligraphy, a practice she continues to hone daily. Her typefaces are primarily for display, and often include a broad variety of ornaments, contextual alternates, and swash forms. Laura Worthington handles every aspect of a font’s creation, from concept and hand-lettering to digitization.
SEE INSTRUCTOR'S CLASSES