Lesson 5 from: Build Your Bridal Bouquet 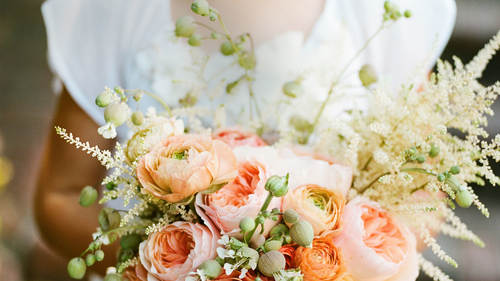 Lesson 5 from: Build Your Bridal Bouquet

Do you ever dio the wedding bouquet that's on the floral phone base to be able to make a cascading bouquet? No. Well, I'm not a fan of floral form at all. I don't use floral foam, so I to make something cascade I would use with the greens, for example, I would use vine I would use things you know? What is that other one that just kind of hangs. Forget the name. Those green ones the latest no, the one with the long hanging green stringing. Yeah, um I would use those basically, I would build my cascade with flowers, not the phone. Yeah. Any other questions? We were commenting on how pretty the ribbon is and we're wondering, yeah, so I did not buy this online. I have two places that I'll I like to buy ribbons from this is from bright ix in san francisco and then there is fraud fraud check. I don't know, sheik. Sorry, if you've heard of that, they bring it from france. I think it's made in france. Um they're just so delicate and beautiful. Um, anyway, I think that something simple is alway...