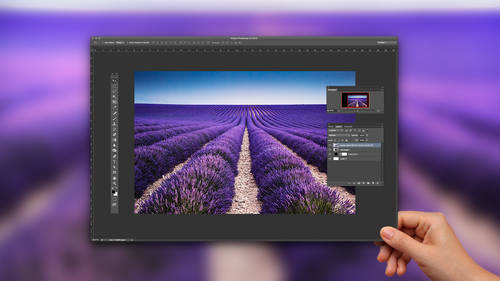 Now, what's interesting here is that yes, we do have this kind of brighter area in the middle right there. It looks a little bit more yellow, but this is the great part because we're doing this on an adjustment layer here. I can also go back in, and I can mask out the certain areas that I would like to adjust less. Okay, so when we do this and what seems really crazy here is that, you know, even though we over adjusted right there, I could go back in and I'm actually going Teoh, ramp this up a bit and this looks like a little bit too intense to me right there. So I'm gonna select my mask, going to take my brush tool, take a very large brush. I'm using my right bracket to make it large. My shift left bracket to kind of soften that up and I'm gonna paint with black and actually an opacity of black here on this layer in order to go in and kind of cutback, the amount of color adjustment on that layer. So as I apply the mask to it, it's going to go in, and it's going to give me that softnes...

Stop depending on Photoshop's Match Color feature, and learn how to match any image color, no matter the use case. Learn how to use the hidden features of the eye dropper tool. Use the info panel to fully understand color composition. Apply color adjustments with an eye for preserving the highlights and shadows of the original image, while expertly importing the sample color to your image.

For me it was easy and simple to understand, easy for an online training. His formula to teach is amazingly fun and energising.

This is a concise course which teaches the concepts of color matching "by the numbers" in a clear and easy-to-follow manner. It was fun to try the techniques I learned in this class on one of my own photographs and the results were not only accurate but quick to achieve.

I learned a lot from this course, and Jason Hoppe gives clear instructions and explanations. I'll be looking for more of his courses.