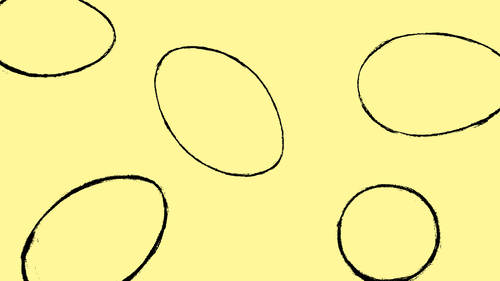 Now I know you might be like, alright, you know, I've been there, done that, don't really need that but I actually wanna talk so that you have a blue graphite pencil in your little kits there. So I know it seems really basic to think about sharpening a pencil. You could absolutely, and many people do this and there's nothing wrong with it, sharpen it in like a little sharpener like this, right. I've got a mildly snazzier one here, this one holds the shavings, so you know this is actually nice if you're going out to a museum to sketch or inside somewhere and you don't want all the shavings to fall on the floor, having something like this is nice. And when you sharpen a pencil in something like this you end up with a tip that has a really, like, smooth cone shape, which all of you have right now, right, it's like right out of the box it's a nice sharp pencil, like why wouldn't you wanna draw with that. And that's great but. It's really great for some things, especially like really fine l...

This beginner-friendly class will teach you essential techniques for drawing realistically. Understand the concepts of line quality, contour line, and mark making. You’ll also learn about the materials used in drawing and art so you’re not intimidated by the art store. And you’ll understand how to slow down and ‘see’ things to better draw them. Instructor Amy Wynne teaches at the Rhode Island School of Design and exhibits her work nationally, winning numerous grants and awards.

By the end of the class, you’ll have created a series of contour drawings of organic and mechanical objects in varied materials.

I love taking courses with Amy Wynne. (I've taken courses with her at RISD and I'll pretty much take any course she teaches.) She inspires me. One thing I wish is that I had been given a list of materials so I could have prepared for this and done all the activities as Amy did them. Thank you so much for this opportunity. I loved it!

This class was great in demonstrating technique as well as helping me get in the right mindset to draw! I found it very helpful for my own practice and I will continue use what I learned. Amy Wynne is a very thoughtful and motivating teacher.

So far so good; the instructor is great. BUT please add a list of materials to purchase and have ready to use for the full benefit and experience in this class! Wish I would have known. I will have to grab these items and come back to re-watch the materials demos section of this class.